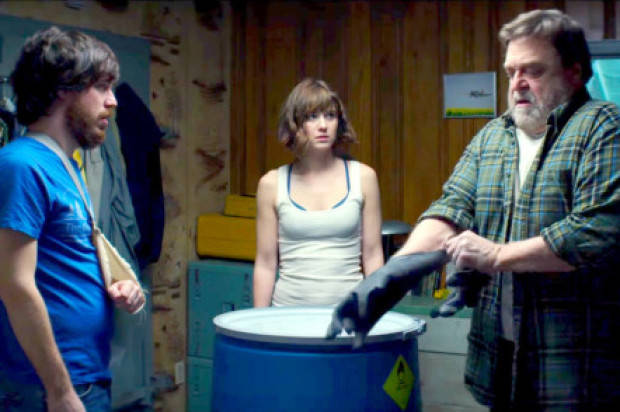 ’10 Cloverfield Lane’ is indeed the type of film you should know as little about as possible before you see it. Though we know now it’s vaguely connected to 2008’s found-footage monster movie ‘Cloverfield’ – a spiritual sequel it’s been touted as – even that nugget of information is revealing too much as this is undoubtedly a mystery that thrives on elements unknown. An old-fashioned thriller filmed in close quarters with only three actors present (save for a bit player or two) ’10 Cloverfield Lane’ shares little in common with its hand-held predecessor, and it’s all the better for it.

Following a wordless prologue magnificently scored by Bear McCreary (a composer known for his work on TV programs such as ‘The Walking Dead’ and ‘Agents of S.H.I.E.D.’) where we meet Mary Elizabeth Winstead’s conflicted Michelle in the process of transferring herself from a seemingly comfortable existence, it takes only mere seconds for ’10 Cloverfield Lane’ to elevate its intrigue factor when Michelle awakes in the bunker of Howard (an unsettling John Goodman), her supposed saviour following a near-fatal car accident. As we immediately side with the ingenious Michelle, and constantly stay mindful of the possibly sinister Howard, the film remains consistently aware of its audience as it presents a power-play of dominance between the two; the bunker’s third occupant, Emmet (John Gallagher, Jr.), shifts his alliance between both throughout.

Where the film ultimately chooses to go is best left for the viewer to experience as the connection to ‘Cloverfield’ isn’t enough to predict the direction of the story, and in the lead-up we’re presented with some of the more intense, yet understated, set-pieces seen on screen in recent memory; the final act is undeniably thrilling though it is also likely to cause the greatest divide between audiences. A view-point unlikely to waver is with the brilliance of its casting with Mary Elizabeth Winstead delivering the type of committed performance that could potentially net her in the field of movie-star status. One of cinema’s greatest under-appreciated actresses Winstead is nothing short of compelling, proving her strength as a performer from the opening moments where her physicality is enough to convey her emotions without saying a single word. Equally as good is John Goodman who continues to display his strength as a dramatic performer in another against-type performance that is effortlessly unnerving. Of the three it’s John Gallagher, Jr. who has the least to do, yet he still imprints a lasting impression as a character, similar to that of Goodman’s, who creates a sense of intriguing unease.

In a time when most film productions find it a mission to keep any of their on-set action a cinematic surprise, it’s alarmingly refreshing to see a film like ’10 Cloverfield Lane’ come out from under the bunker to an unsuspecting audience – kudos to Bad Robot and Paramount Pictures for keeping things so tightly under wraps – with this admirable scheme proving the most valuable asset to the film’s (hopefully fruitful) success. With a duo of stellar performances from Winstead and Goodman at the helm, this chilling movie experience is one of 2016’s first great surprises.