CINEMA RELEASE: 300: RISE OF AN EMPIRE 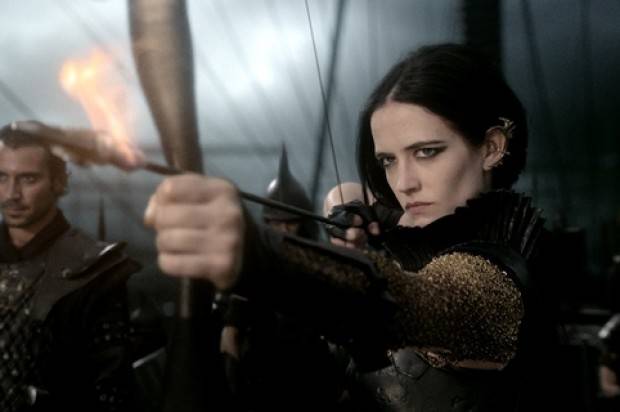 CINEMA RELEASE: 300: RISE OF AN EMPIRE
Release date: 6th March
Director: Noam Murro
Cast: Sullivan Stapleton, Lena Heady, Eva Green, David Wenham, Rodrigo Santoro, Callum Mulvey
Classification: MA15+ (Strong Bloody Violence and Sex Scene)
Review by Peter Gray
Prequel? Sequel? Side-quel? I’m not entirely sure of the best way to describe ‘300: Rise of an Empire’ in regards to its predecessor ‘300’, but whatever the case it’s a downgrade from a film that wasn’t exactly screaming out for a companion piece. Speaking of which, perhaps companion is the best word to label the film as it shows us a different point of view of some of the events from the first film, so when King Leonidas (Gerard Butler) was exclaiming “THIS IS SPARTA!” and paving the charge into battle with the Persian forces, it turns out our new protagonist Thermistokles (Sullivan Stapleton) was observing from the sidelines.
I’ll hand it to the filmmakers for attempting an interesting spin on the story but it can’t help but feel all too dull and familiar as Thermistokles’ tale at sea with his army of men lacking any real drama or convincing camaraderie (unless you count the extreme homo-eroticism angle played up by the abundance of half-naked men that are his crew). In addition Australian actor Sullivan Stapleton is rather unproven as a leading man, and whilst ‘300’ lead Gerard Butler isn’t always convincing in his work, it can’t be denied that his larger-than-life performance suited the original. Stapleton, as much as he fits the part on a physical level, is far too one-note and, as such, comes off bland and disinterested.
With Stapleton’s performance lacking, it seems only fitting that the film shift its focus on to Eva Green as Artemisia, a Greek-born naval commander who turns her back on her own to lead the Persian army into battle. As ridiculous and as over-the-top as she is here, even going so far as to decapitate an Athenian soldier before planting a kiss on his lifeless head, Green manages to get away with it as she appears to recognise the type of film she’s in and throws herself into the scene-chewing part with aplomb. Director Noam Murro (whose only major film credit is the indie comedy ‘Smart People’) wisely allocates Green a hefty amount of screen time as she effortlessly dominates whatever frame she’s in, even when she appears slightly awkward wielding a sword in some of the climactic battle scenes.
Murro has done a commendable job of mimicking the same style Zack Snyder implemented for the original, and it’s similarly violent (you’ll never have to wonder what happens to someone’s face after getting tramped on by a horse after seeing this) but there’s next to nothing that sets it apart from ‘300’, or even a clone like ‘Immortals’, with their only being one moment it truly comes alive on its own merits when Thermistokles is lured by Artemisia for a parlay and she winds up seducing him, resulting in a rather hilarious sex-come-battle scene that ends with a topless Green brandishing a sword. If it wasn’t for Green ‘300: Rise of an Empire’ would be near torture to sit through, and though Stapleton isn’t helping matters with his lifeless turn, he isn’t really the biggest problem as the screenplay (co-authored by Snyder) fails to deliver anything of worth. Thermistokles is written as just a soldier with no emotional attachment to speak of, and because of this it’s a hard task for an audience to care. A sub-plot involving a father-son duo fighting alongside each other hopes to deliver something of an emotional push but it too falls flat and only really highlights actor Callum Mulvey’s inability to play subtle.
Given that it’s been 8 years since ‘300’, ‘Rise of an Empire’ certainly hasn’t been a rushed job and though I don’t suspect anyone was expecting this to outdo its predecessor, I didn’t think what we would get would be so boring. A direct follow-up involving the Spartan battle against the God-like Xerxes (Rodrigo Santoro, returning with even more camp swagger than the original) that was teased at the conclusion of ‘300’ seems like the best way to of gone, and given the final frame of this movie they’d like us to think we’ve got more coming but if this is an indication of where this series wants to go, they should end this battle whilst they can.
My rating 2/5 (A battle that should end)