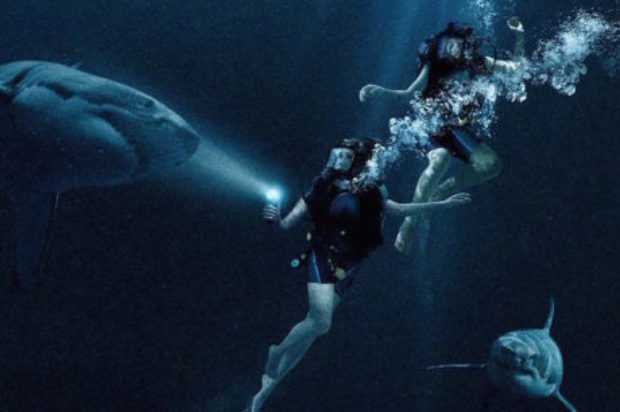 One of those movies working with a premise so simple it’s almost insultingly formulaic, ’47 Metres Down’ is nonetheless an effective, often tense outing that utilises its basic mentality to its benefit. Originally planned as a straight-to-DVD title, Johannes Roberts’ claustrophobic thriller saw its lifespan rejuvenated thanks to its original distribution rights being sold to a larger studio, possibly encouraged by the stellar response to last year’s similarly themed (and more operative) Blake Lively feature ‘The Shallows’, and whilst the film’s limited budget is evident, the product itself never feels less-than.

For about 90% of the film’s brief 85 minute running time, the audience spend their time in the depths of the ocean with Lisa (Mandy Moore) and Kate (Claire Holt), a sisterly duo who have travelled to Mexico in a bid to clear their minds following Lisa’s recent dumping from her boyfriend. What’s the best way to mend a broken heart? Cage diving with sharks of course! Hopping aboard one of the more un-safe appearing boats the silver screen has had the pleasure of displaying, Lisa and Kate throw caution to the wind and allow shady captain Taylor (Matthew Modine) to sail them out to the middle of the ocean where they proceed to gear up for a close encounter with a bevy of hungry sharks. Only moments after being lowered into the water in their caged surroundings, the cable breaks and the girls plummet to the ocean floor – 47 metres down as it were – where they have limited time and even less oxygen on hand to figure out their escape plan.

Given the limitations of what he has to work with, Roberts makes for a fine craftsman as his script manoeuvres around their ordeal with a surprising touch of realism. The girls simply can’t swim up as they run the risk of getting the bends (nitrogen bubbles forming in their system), as well as their depth ratio proving just that far out of communication level with Taylor and his crew on the ocean surface. Oh, and there’s hungry sharks circling in rapid succession too! In addition to suitably handling plot devices, Roberts also proves a relatively skilful director in his treatment of the confined work space the film offers up, and keeping the sharks more as a sporadic visual allows for a greater sense of dread to be conjured; there’s a particularly nail-biting POV sequence involving one character swimming with the limited light illuminating from their torch the only assisted vision afforded, creating the feeling that at any given moment a shark could come into view without the luxury of fore-warning.

As impressive as ’47 Metres Down’ proves to be given its obvious restrictions, a rather odd structural choice is made during the film’s climactic moments which could potentially irk invested viewers. It’s an unexpected detour, and it’s hard to deny the emotional impact it ultimately earns, but it doesn’t feel organic to the rest of the film, a film that up to that point was demonstrating weight. Climax choice aside, ’47 Metres Down’ is the perfect example of no-frills filmmaking that embraces its limitations, pulling off moderate tension and a fearful atmosphere in the process.