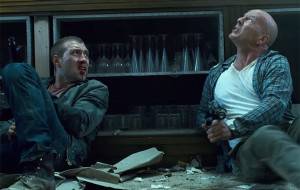 It’s pretty safe to say that the ‘Die Hard’ franchise has been dead (no pun intended) for a while now.  1995’s ‘With a Vengeance’, part 3 for those keeping tabs, was the last triumphant run for officer John McClane as the later entries in the continuing series have lost that spark of him being a rough yet relatable hero when they inexplicably morphed him into some kind of super-human.  I realise a lot of the situations the character found himself dealing with in the original trilogy were heightened for the purpose of entertainment but the extremities shown in 2007’s ‘Die Hard 4.0’ were on another ridiculous level all together.

For part 5, or ‘A Good Day To Die Hard’ as it’s being released, the insanity is amped up even further when a clearly aging McClane (a clearly aging Bruce Willis) sets off to Russia to track down his estranged son Jack (Jai Courtney) who has been arrested for murder.  Of course all is not as it seems with Jack working for the CIA under orders to retrieve an infamous Russian political prisoner with ties to Chernobyl.  It’s perfect fodder for an action film; it’s just a shame that apart from being a lousy ‘Die Hard’ sequel, this isn’t even a particularly passable action film on its own accord.  Not all together surprising though as the talent behind the camera leave a lot to be desired with director John Moore racking up such cinematic turkeys as ‘Max Payne’ and the remake of ‘The Omen’ prior to working with a tepid script from Skip Woods who appears to not even have tried to get a sense of who the character of McClane is or was.  Apart from the John McClane name, this isn’t the same guy that so memorably saved his wife (on two occasions no less) and the city of New York in the previous instalments.  It also doesn’t help matters that they’ve opted for him to almost play second fiddle to the character of Jack – no doubt moving the series forward with the new generation McClane as its hero is the intention there.

As for Jack, well he’s no John McClane and that’s not a fault of Courtney’s as he’s quite reasonable in the role and he has the right look for the genre, but his character is just so worthless.  All throughout the films particularly light 95 minute running time, Jack seems to hate John but we’re never really given a reason why.  Jack even goes so far as to pull a gun on John, but whatever conflict that has brewed between the two is never fleshed out and then when the carnage starts, all is basically forgotten.  For such a solidly built guy Jack ironically appears more like a whiny little brat, and if he is the future of this series, and given the poor response to this film it’s highly unlikely any further ventures will materialise, they need to work on some character treatment.  Also making matters worse is the weakness pertaining to the villains with every generic cliché thrown towards the head Russian nasty to the point that it’s comical.  Where’s Alan Rickman when you need him?

At least there’s always Bruce Willis right? Sadly even he isn’t able to elevate this to a watchable platform as he appears truly disconnected from his surroundings and his attempts at coining a new catch-phrase (“I’m on vacation!”) are truly painful.  He does get the classic “Yippee Ki-Yay…” line in there, but even then it feels more forced than anything and comes off like a contractual obligation rather than a genuine quip.

Being an action film though it should be noted that it does offer up an obscene amount of explosive butchery and the first major sequence involving a car chase (and a tank for good measure) is enjoyable in all its lunacy.  But by the time the finale comes around where John is dodging helicopter blades and being thrown through glass windows like a ragdoll, it’s all become so tedious and unfathomable that if you hadn’t stopped caring by this point, you’d well and truly be uninvested now watching the McClane’s fall freely through shards of glass and concrete only to rise reacting far less seriously than they should.

I have a great respect for the original ‘Die Hard’ trilogy, and for all its faults I still enjoyed ‘Die Hard 4.0’, and so I wanted to get some enjoyment out of this entry but sadly it just fails on almost every attempt.  A less is more approach will be the best way to tackle a part 6, should it ever come to that, but I think Mr. McClane has had it after this fifth inning and it’s time to lay this series to rest.