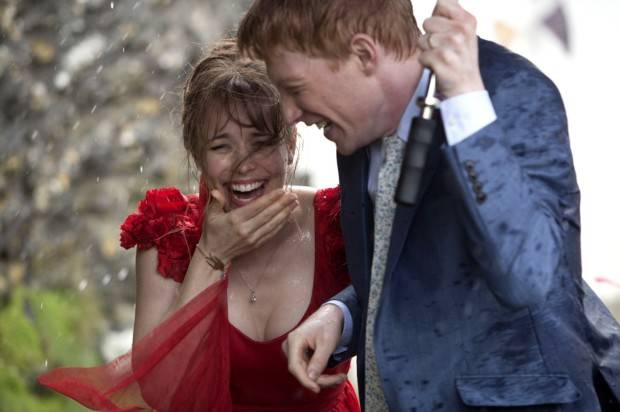 CINEMA RELEASE: ABOUT TIME
Release date: 17th October 2013
Director: Richard Curtis
Cast: Domnhall Gleeson, Rachel McAdams, Bill Nighy, Tom Hollander, Margot Robbie
Review by Peter Gray
With ‘Four Weddings and a Funeral’, ‘Notting Hill’ and his directorial debut ‘Love Actually’, it’s safe to say that Richard Curtis has a knack for penning feel-good romantic comedies. With his latest venture ‘About Time’ Curtis has adopted a slight science-fiction element which, on paper, sounds ridiculous, and you can imagine that had this been an American production it very well could have been, but with all its British charm come indie mentality the final product is alarmingly sweet, and surprisingly straight forward.
Domnhall Gleeson (in a role you imagine would’ve been Hugh Grant’s a decade ago) stars as young Tim, a somewhat awkward but nonetheless endearing Brit, who on his 21st birthday learns from his father (Bill Nighy) that the men of his family are able to time travel. Understandably weary of this news, Tim reluctantly follows the precise instructions of retreating to a dark place, in this case a cupboard, closes his eyes and clenches his fists, and thinks of the moment he would like to travel to. Having just celebrated New Year’s, a party he attended where he missed an opportunity for a midnight kiss is his go-to destination, and it doesn’t take much to figure out how he is going to rectify the situation with his new found skill. As detailed by his dad, the time travel doesn’t allow him to change moments in history (“you can’t kill Hitler or shag Helen of Troy” as its put) merely moments in his life, and given how desperate Tim is to find a girlfriend it’s clear what his summer will consist of.
His first port of call arrives in the form of Charlotte (Queensland actress Margot Robbie), a friend of his quirky sister Kit Kat (Lydia Wilson) who leaves him heartbroken when he discovers that even with the ability to alter time, her feelings aren’t reciprocal. Moving to London to further his career as a lawyer, Tim meets Mary (Rachel McAdams), an American with a Kate Moss obsession, in a bizarre blind dating establishment where couples dine in the dark. Spending the entire evening chatting without knowing what the other looks like, they finally see each other and, as expected, fall in love. Their courtship isn’t without its issues though as a change in time that he creates to assist his struggling playwright housemate (Tom Hollander) avoid an opening night disaster means his meet with Mary never took place and so he has to woo her in various amusing situations before they’re a couple. From here on the film details their relationship from the awkward first moments of intimacy, naturally smoothed over thanks to his ability, to their wedding, and eventually the birth of their first child. The film is deliriously sweet, no question, and it helps that Gleeson and McAdams play nicely off each other, but every so often the seams Curtis has stitched together slowly start to unravel.
At 123 minutes ‘About Time’ vastly overstays its welcome with tedious sequences that could’ve been trimmed or deleted without affecting the outcome. One such example is a scene where Mary can’t make up her mind which dress to where, so naturally she tries on a plethora of gowns whilst Tim sits idly by unable to help. It’s a moment we’ve seen countless times before, and given here that it’s about 5 dresses too long, it borders on painful. It’s a film that doesn’t know when to stop, and given its title you have to find the irony quite amusing. Similarly the manner it treats the time travel aspect becomes increasingly lazier with each trip as the rules laid out seem to be thrown away when it seems fit to benefit the story.
As I said though it’s a sweet film despite its flaws, and it’s the kind of sweetness that only the Brits can do as it doesn’t go overboard on sentiment or succumb to sexualised humour. The film truly offers up some genuine moments of joy, particularly when involving Tim and his father. The relationship between father and son sparkles, it’s honest, it’s funny, and it’s beautiful – it really is the glue that holds the production together. You almost wish that their bond was the focus with the relationship between Tim and Mary playing second fiddle – how’s that for turning the genre on its head.
My rating 3.5/5 (Flaws can’t delay its overall appeal)