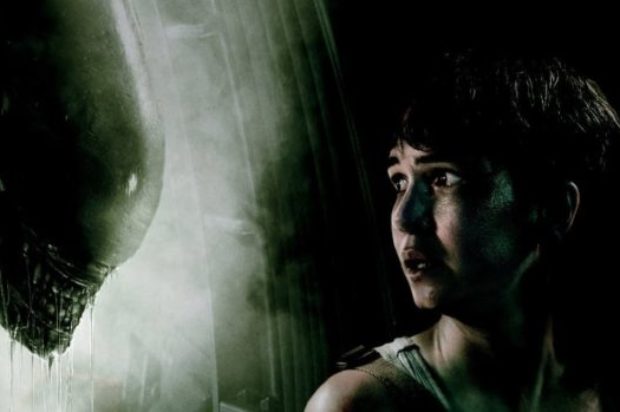 As ambitious as Ridley Scott’s ‘Prometheus’ was, it ultimately became more a divisive look at the ‘Alien’ franchise as opposed to a film judged on its own merits. The arguments both for and against ‘Prometheus’ prove valid, and it’s likely that ‘Alien: Covenant’ will earn a similar reputation. Gone is any title ambiguity with Scott’s follow-up leaving us with no doubt that this is directly connected to his 1979 science-fiction gem that introduced us all to a species of cinematic extra-terrestrials that have rarely been matched since.

Picking up a decade after the events of ‘Prometheus’, ‘Covenant’ presents us with a new rag-tag team of space explorers aboard the titular hull on their journey towards a preordained habitable planet. After receiving a transmission call from what they believe to be another surviving human on a near-by planet, the Covenant crew (led by Billy Crudup’s man-of-faith Oram) derail their travel course and anchor towards this mysterious planet, an environment that may prove fruitful should it be habitually sound.

It goes without saying that their experience on this planet is far from pleasant, and the script from John Logan (‘Skyfall’, TV’s ‘Penny Dreadful’) and Dante Harper (his feature debut) attempts to address some of the questions left unanswered from ‘Prometheus’, mainly in what became of android David (Michael Fassbender) and lone human survivor Elizabeth Shaw (Noomi Rapace) following their determination to learn from the Engineers as to why they wished to destroy humanity. Unsurprisingly, David’s activity on this planet has been particularly sinister, and it’s through meeting him that the Covenant crew’s journey descends into nightmarish brutality.

As much as ‘Covenant’ proudly presents us with the xenomorphs in all their drooling, sleek-domed glory (there are a handful of gory sequences that are likely to make gleeful audiences wince), Fassbender’s stoic David is perhaps the film’s most terrifying aspect. To elaborate any further on his character would be an injustice to curious audience members, and in saying nothing further I could be expressing more, but it’s the film’s ability to generate a conversation, as positive or as negative as it may be, that will ultimately prove its impact.

Outside of Fassbender, sadly, the remaining cast involved all fail to leave much of an impact, but it’s certainly not for a lack of trying as Danny McBride (successfully playing against type as a no-nonsense pilot), Carmen Ejogo and Demian Bichir all make the most of their paper-thin roles; Katherine Waterston’s Ripley-esque heroine Daniels never graduates beyond a generic persona however, leaving us with a lead character who appears inadequate to carry her own movie.

Much like ‘Prometheus’ became a talk-piece on its own value against its quality within the ‘Alien’ franchise, ‘Covenant’ is similarly a product that earns discussion as it presents arguably fascinating ideas within itself and the series thus far. Some will walk away disappointed, others suitably hyped for where Scott can take us, and though the film misses a slew of beats with overdrawn scenes that overstay their welcome, the story doors that have been open are intriguing enough to keep us coming back to this brand.