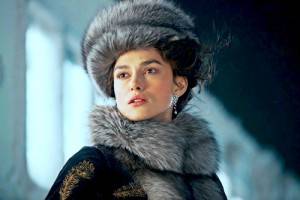 Leo Tolstoy’s famed novel ‘Anna Karenina’ has been adapted many a time since its publication in 1877 and for its 13th incarnation as a film British director Joe Wright has opted for a particularly theatrical take on the material, a technique likely to polarize modern audiences and be deemed a grand success or a dismal failure.  As it opens as a staged performance with ropes and hoists, and footlights and draperies in clear view, the characters swirl into action before the set rotates and turns upon itself – almost like a children’s pop-up book – with such diverse settings as a parliamentarian office, a Moscow restaurant and a bustling train station being seamlessly blended together.  It reminded me of Baz Luhrmann’s ‘Moulin Rouge’, except there was no musical payoff, and the rapid pace at which the locations are shifted does take some getting used to; although rather ironically when the film eventually settles into a more straightforward narrative you find yourself yearning for the dilapidated dollhouse theatre it firstly presented itself as.

As for the story itself, director Wright has perhaps tried to be too smart for his own good as there is no introduction to these characters and very little cultural or historical context of Russia, and amidst the grandeur of the revolving sets and sumptuous costume design, it all comes across hard to understand.  What we eventually gather is Anna (Keira Knightley) is a married aristocrat and socialite who is helping her womanizing brother Stiva (a wildly exaggerated Matthew McFadyen) mend the broken relationship with his devastated wife Dolly (Kelly MacDonald).  This ultimately serves as a prefigure to her own predicament when she begins a wildly passionate affair with Count Vronsky (Aaron Taylor-Johnson), a cavalry officer and bachelor, who insists he will marry her if she agrees to leave her husband Alexei Karenin (Jude Law).  Vulnerable to the pressures of society she suffers the consequences in a social aspect when she is shunned by those in her circle leading her to spiral downwards, unable to believe Vronsky’s reassurance that she will be alright her anxiousness and paranoia grows stronger and ultimately consumes her.

The story seems like perfect fodder for someone like Wright who has the more successful adapted ventures ‘Pride & Prejudice’ and ‘Atonement’ to his name, and there’s no denying that he has a bold and beautiful vision and at the very least he should be commended on his attempts.  A director can only do so much though and the script from Tom Stoppard and the collective cast are just as responsible for the end result.  As mentioned before Stoppard doesn’t bother with introduction and so his narrative feels like it’s playing catch up to the over stylised visuals, the two never working together in consistency.  And the cast, as strong as they look on paper, all feel like they are working on a different project with each lead actor appearing as if they are playing for themselves as opposed to working together.  Delivering the films strongest performance is Law as the withdrawn Alexei, the actor no longer playing on his roguish charm or looks allowing him to immerse himself into the character.  On the opposite side of the spectrum is Johnson as Vronsky who appears wildly miscast, never convincing us he’s the virile type to make a socialite wife his mistress.  Aesthetically the young actor is a pleasure to look at, and the camera loves him, but he feels more like a young boy trying to be a man, an d there’s nary a moment he convinces that he’s anything more than just in lust with Anna as opposed to in love.  And as for Knightley? Like her director this feels like it should’ve been a perfect fit for the young starlet, and yet she proves to be the films biggest problem.  Knightley is one of those actresses that a large sum of people seem to dislike (I personally don’t have an issue with her) but she isn’t making it easy for herself with her turn as Anna.  When she downplays her thoughts and puckers up her pout she is a striking woman and the less is more approach tends to suit her best, but Anna’s inner turmoil sadly doesn’t stay that way and the hysterical manner in which Knightley escalates towards is laughable in its fragmentation.

A ballroom sequence where Anna and Vronsky dance together, their sexual desires burning ever so passionately as they float across the floor to a gorgeous Dario Marinelli score is perhaps the greatest example of Wright’s style working as a complete whole with all the other elements of the film, and its moments like this that add to the overall frustration of ‘Anna Karenina’ as these moments of magic prove the collective talent involved but its ultimately too overindulgent for its own good.  As bold and as visionary as this particular ‘Anna Karenina’ is, it won’t be remembered as a distinguished adaptation of the novel but thankfully great works of literature don’t need authentic film adaptions to define them.

My rating 2/5 (Visually arresting but a cinematic crime overall)