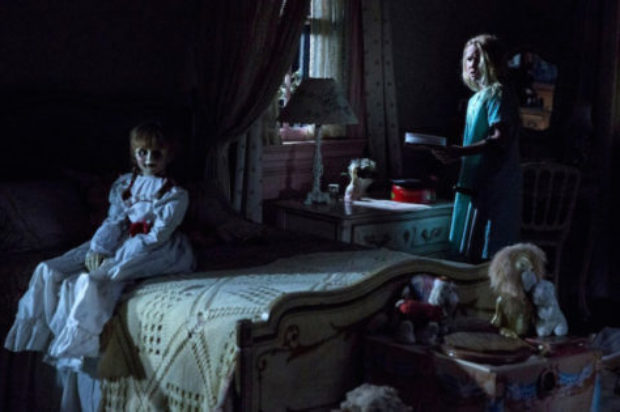 Well, at least it’s better than the original. That’s essentially one of the few positive notes I can state about ‘Annabelle: Creation’, a should-be terrifying movie experience that has all the ingredients at hand to be a worthy horror film but no masterful cook at the helm to successfully execute.

It all starts off so promising though with a rather heartbreaking tragedy striking dollmaker Anthony LaPaglia and his loving wife Miranda Otto setting the grim tone of what’s to come. After years of much-needed healing, the two open their expansive property up as an orphanage of sorts, though Otto’s Esther stays hidden from view due to repercussions linked to the titular doll; if you have seen the original film or either ‘Conjuring’ film it shouldn’t be too much of a reach to garner the events that have taken place.

A group of young girls come to stay at the house under the watchful eye of Sister Charlotte (Stephanie Sigman), and before you can say “paranormal activity”, evil makes its presence known to the new guests, particularly polio-stricken Janice (Talitha Bateman) and her dippy best friend Linda (Lulu Wilson, clearly directed under the assumption that a wide-eyed stare translates as being scared). From here on ‘Annabelle: Creation’ does its best to haunt the audience with obvious set-pieces, and aside from a neat barn sequence that utilises the haunting figure of a scarecrow, there isn’t too much on offer that we haven’t seen before; the haunting nun figure from ‘The Conjuring 2’ gets a brief cameo too that shows promise however.

The 1950’s period setting and the primary house location mean that at least the film looks unsettling, but all the quirks the house has on offer (dumbwaiter, the chair lift) don’t prove of benefit to director David F. Sandberg (who helmed the more effective ‘Lights Out’) or writer Gary Dauberman (‘Annabelle’) who aren’t able to make anything remotely scary out of obvious plot devices. And then there’s the Annabelle doll itself. Whilst it’s an unpleasant-looking creation, it’s starting to lose effect given how familiar we are becoming with its shtick, and the moments the film opt to give the doll some personality, it comes off more humorous than horrific; I think I snickered more than I squirmed.

As someone who loves the horror genre, and greatly appreciated both ‘The Conjuring’ and its sequel, it’s a sting that ‘Annabelle: Creation’ isn’t as effective as it should’ve been. Whilst it was always going to be a bit been-there-done-that (how many horror films have worked with the same premise over the years?) I wasn’t expecting such predictability from a film that seems to believe the doll’s aesthetic will do the bulk of the work.