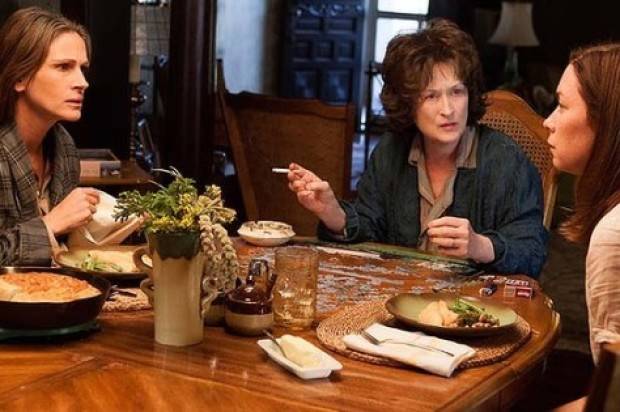 CINEMA RELEASE: AUGUST: OSAGE COUNTY
Release date: 1st January 2014
Director: John Wells
Cast: Meryl Streep, Julia Roberts, Ewan McGregor, Chris Cooper, Abigail Breslin, Juliette Lewis, Dermot Mulroney, Benedict Cumberbatch
Classification: MA15+ (Strong Coarse Language and Mature Themes)
Review by Peter Gray
With a cast that boasts such talent as Meryl Streep, Julia Roberts, Chris Cooper, Benedict Cumberbatch and Juliette Lewis, a screenplay by Tracy Letts (adapting his own work), and George Clooney on hand as a producer, it’s not hard to view ‘August: Osage County’ as an “Oscar bait” movie. Streep and Roberts have already garnered Golden Globe nominations for their respective work, and come Oscar time the duo will be safe bets, but as it stands ‘August…’ is still only a decent film.
Don’t get me wrong though there is still greatness here, specifically the source material. Tracy Letts has a distinct use in dialogue and as he’s adapted his own play, the script manages to transform the filthiest of interchange into utter poetry; not an easy task with such a foul-mouthed movie where the “c-word” and the “f-word” are dropped like second nature. As respected as Letts’ words are, there is still the feeling that overall the film is a bit too polished. John Wells is a suitable enough director but far too conventional at the same time with it coming across more like a blatant attempt to impress the Academy, and you can’t help but wonder how a less commercial take on the material would’ve benefited the dark depravity the story holds.
As for the story, on the surface ‘August: Osage County’ would have you believe it’s detailing a highly dysfunctional family reunion, and whilst there’s an element of truth there, the film proves so much more. After their family patriarch goes missing, the estranged Weston family reunite at the home of matriarch Violet (Streep) – a belligerent woman with a cutting tongue and reliability on prescription drugs following her diagnosis of mouth cancer. Her daughters Barbara (Roberts), Karen (Juliette Lewis) and Ivy (Julianne Nicholson), all who have kept their distance from their “truth telling” mother, reluctantly return home (with their significant others in tow) for a reunion filled to the brim with excruciating revelations. Just how excruciating these revelations are is best left a secret, but suffice to say Jerry Springer would have a field day with how affected this clan is.
Unsurprisingly Streep is great as Violet, but this is a BIG performance in the vein of Joan Crawford and, as such, it feels less human; the character is borderline-insane and on the verge of being almost demonic, not helped by the big black wig and oversized sunglasses Streep sports throughout. Similarly Roberts comes across less natural as Barbara, the toughest of the daughters, and though it can’t be denied how much fun she is having, she is perhaps enjoying herself too much that when she goes head on against Streep, and the two enjoy plenty of brutal banter together, it feels like they are trying to “out-act” each other. With all the scene-stealing taking place, it ironically allows Nicholson and Lewis as the “lesser” sisters to really shine, the two delivering natural, more honest work.
In fact a great deal of the supporting cast walk away with the film more so than its leads with Margo Martindale in particular seeming like the more logical choice for award buzz. As Violet’s shrewish sister Mattie Fae, she too is similarly monstrous towards her son – family black sheep Little Charles (Cumberbatch in a small but poignant role) – but she’s still recognisably human as opposed to Streep. Chris Cooper as put-upon husband Charles also delivers some of his finest work, with a scene where he reprimands Mattie Fae for her treatment of Little Charles standing as one of the film’s most effective moments.
Come award season ‘August: Osage County’ will most likely be a title that’ll have its weight thrown around, with Streep and Roberts through status alone the likely recipients. It’s a fine film, and a surprisingly funny one at that, but it all feels just a bit too neat and catered for the Academy.
My rating 3.5/5 (A dark start to the year)