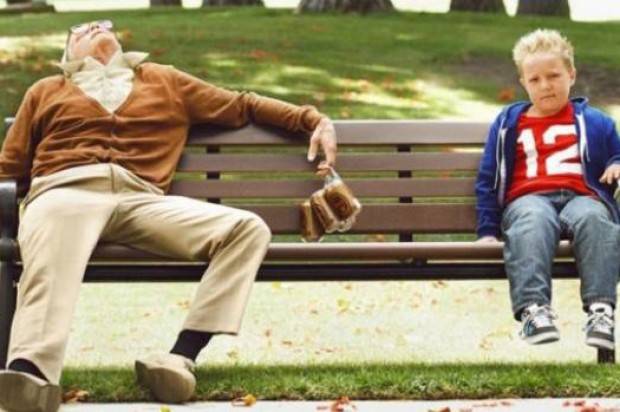 CINEMA RELEASE: BAD GRANDPA
Release date: 14th November 2013
Director: Jeff Tremaine
Cast: Johnny Knoxville, Jackson Nicoll, Greg Harris
Classification: MA15+ (Strong Sexual References and Crude Humour)
Review by Peter Gray
Whilst ‘Bad Grandpa’ still very much relies on the outrageous stunts and public pranks that the ‘Jackass’ crew became synonymous with in both their television series and film counterparts, what sets it apart is its inclusion of a narrative. It’s a slight one at that but nonetheless it works as our titular geriatric and his grandson travel across America, pranking unsuspecting inhabitants along the way. Irving Zisman (Johnny Knoxville) is well into his 80’s, has just “suffered” the loss of his wife and ,following an awkward funeral service, is left to look after his grandson Billy (Jackson Nicoll) when his white trash daughter is shipped off to prison. Road tripping to see Billy’s father, another upstanding citizen if ever there was one (sarcasm intended), the duo find themselves in the most unique of situations along the way.
As brave and as outrageous as Knoxville is to don the identity of a shameless 80 year old man, ‘Bad Grandpa’ really works thanks in large part to Nicoll. The young actor proves just as game and the connection between him and his “grandpa” is perhaps too strong as they bounce off each other with confident abandon, allowing each prank to be that much more successful. Some of their exploits include the disruption of a wedding, the aforementioned bungled funeral, and a brazen attempt at shoplifting, and if you’re worried that the film is one of those outings where all the best bits have been spoiled in the trailer, you can rest easy as there are a series of utterly hilarious sequences that haven’t been alluded to in the promos, one in particular that will have your jaw drop in disbelief as low as a distinct body part displayed on screen.
If you have seen the trailer though then you’ll be aware of the children’s beauty pageant sequence, and watching it in its entirety delivers just as many laughs as you’d expect. Nicoll here, dolled up and eerily believable as a little girl, commits 100% to the challenge and it pays off in spades – I dare say you won’t think of ‘Cherry Pie’ by Warrant the same way again. As good as Nicoll and Knoxville are here, it’s the parents of the other contestants and their collective reaction that make the scene all the more uncomfortable and therefore all the more amusing. For the most part ‘Bad Grandpa’ succeeds in its attempt to both shock and charm its audience, there’s even a touch of sweetness peppered into the story as Irving learns to truly care for Billy, but there’s one instance where a sense of real danger is felt, and for a moment the film becomes seriously unnerving. The prank involves the actor portraying Billy’s father acting in an intolerant and abusive manner towards his “son” in front of the wrong crowd, and the reaction felt from those unaware it’s a set up really bring home the risk of this style of prank cinema.
This kind of insanity though ultimately assists ‘Bad Grandpa’ in being one of the most shockingly funny outings of this year. It feels like there’s been a large lull on the comedy front as of late, so something like this is a good change of pace for those wanting to experience a hefty laugh. If you aren’t aware of the ‘Jackass’ style of humour, or you’re easily offended, then this won’t be the type of film for you, but you’d probably already have gathered your thoughts by seeing the trailer. Personally, I enjoyed ‘Bad Grandpa’ for what it was, and I laughed a lot, and that’s all I can ask for with a comedy. Knoxville and Nicoll make for a rather unique “Odd Couple” and, against all odds, they prove a pairing that genuinely works.
My rating 3.5/5 (It’s good to be ‘Bad’)