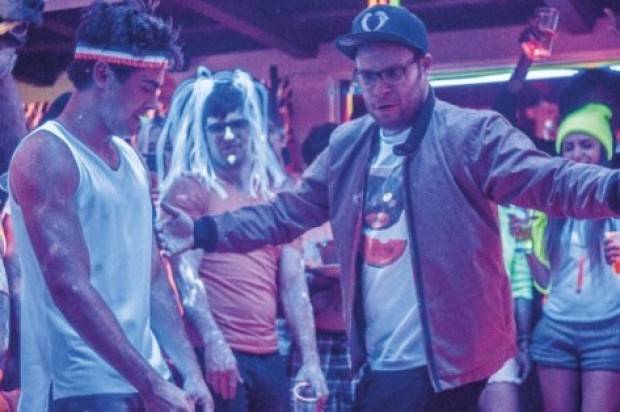 ‘Bad Neighbours’ (or ‘Neighbours’ as it is known in the United States, renamed internationally to perhaps not be confused with a certain Ramsay Street set soapie) announces itself loud and clear almost from the get-go that it will not be a sophisticated comedy in any way, shape or form. Every crude prank, sexual quip and general vulgarity you can imagine has been mashed together, and quite predictably given the collective minds of director Nicholas Stoller (‘Get Him To The Greek’), producer Evan Goldberg (‘This is the End’) and star Seth Rogen, but it’s all so passionately performed by a fearless ensemble, all who are fully aware of what type of film they’re making, that you can’t pick a fault in terms of the film achieving its goal.

The title is the clearest indication of what basic plot the film lays out, and ‘Bad Neighbours’ was never going to be anything other than an excuse for Rogen and his unlikely nemesis Zac Efron to see their volatile relationship escalate in an energetic, and juvenile, fashion. Love him or hate him, Rogen, with his husky voice, trademark stoner laugh, and flabby body (to which he flaunts with no shame) is a known quantity, and in most cases will be the make-or-break on whether you’re going to enjoy the particular film, and whilst ‘Bad Neighbours’ makes the most of Rogen’s specific appeal, it’s Efron who proves the biggest drawcard. No longer the well behaved Disney pretty boy, here he dares to push the envelope with tats, muscles, and a suitably foul mouth (as it’s put he’s like something ‘a gay guy created in a laboratory’). It’s all so predictable given his frat house president character, but director Stoller knows exactly what he’s working with, and Efron appears right at home playing what could be essentially an extension of his true persona.

As the film begins with Rogen’s office worker Mac settling in for the new challenges of parenthood with his wife Kelly (a very Australian Rose Byrne, clearly enjoying herself) and their baby Stella (played by twins Elise & Zoey Vargas, quite possibly the cutest baby to be seen on-screen in a good while), his insecure mind process on how to juggle a lifestyle with family commitments is quickly established. As much as Mac and Kelly like to believe they have it sorted, Stella’s distracting presence during a spontaneous afternoon sexual liaison proves otherwise, and in these few short moments the film inaugurates the couple’s now-routine lifestyle, which makes for the impending lunacy against Efron’s fraternity playboy Teddy all the more justified.

When Delta Psi sets up shop next door Mac and Kelly believe they can win their new neighbours over, and it all seems to start out so promising. A simple suggestion to “keep it down” leads to a night of bonding, Teddy and Mac even ‘cross swords’ as they urinate together, before the trust of brotherhood is tested and an all-out war is declared where nothing is sacred and no act is too low or too depraved; their differences ultimately culminating in a battle involving sex toys. You’re likely to be offended by the abundance of bad taste on board, but that doesn’t negate how very funny the film is when it’s flying high. In addition to Rogen, Efron and Byrne, there’s plenty of fun to be had in the no-nonsense University Dean played by Lisa Kudrow, Efron’s right-hand man Dave Franco continues to impress as the more approachable version of his brother James, and, as is the case with most of these particular films, the supporting cast uncovers some true gems with Hannibal Buress as the police officer constantly called in on the Frat House’s troubles and Liz Cackowski as a witty real estate agent proving as the stand-outs.

Though it’s not a film that will appeal to the masses, ‘Bad Neighbours’ knows its specific target, and as such it has aimed for the bullseye and almost come out a winner. Perhaps overstaying its welcome just slightly, there’s still enough energy and infectious chaos to deem it a winner.