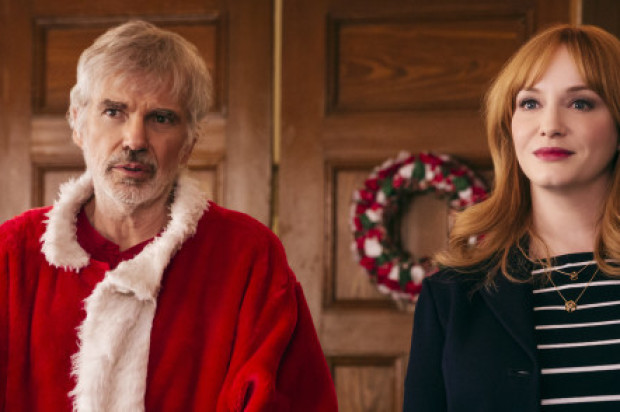 As mean-spirited and bitter a comedy it was, there was still something wickedly delightful about 2003’s ‘Bad Santa’, a black-as-coal anti-festive season laugher that utilised Billy Bob Thornton’s comfortably nasty demeanour to the best of its ability.  The peculiarity of director Terry Zwigoff (‘Ghost World’) proved a neat fit for a film that was uncharacteristically cynical about the holidays (however ironic we know that to actually be) and the bravery of its committed cast resulted in a film that was as genuinely funny as it was filthy.

Despite the original film wrapping up in a suitable manner, the cruellest of actions has been applied to Zwigoff’s well-regarded comedy by following it up with a feature that is not only wholly unnecessary, but alarmingly unfunny.  The fact that ‘Bad Santa 2’ is unnecessary shouldn’t be held against it as many a needless sequel have been placed upon us over the last few years with surprisingly glowing results, neither should the length of time between outings (13 years in this case), no, the malice here stems from the fact that this so-called comedy just isn’t very funny.

Back at rock-bottom (where he belongs quite rightfully) Willie Soke (Thornton) is lured in for another low-scale heist job that he is promised will pay in dividends of the millions. Unwillingly coerced by former partner-in-crime Marcus (Tony Cox) and estranged mother Sunny (Kathy Bates), Willie, once again, fights against his own decency as the return of incessant man-child Thurman Merman (Brett Kelly) plays on the last string of civility he owns. With Willie and Marcus sparring barbs on the former’s low-life mentality and the latter’s little-person height, ‘Bad Santa 2’ feels all a little too familiar, and the insults are far from original; even Bates, try as she might, can’t make her foul-mouthed Mrs. Clause seem remotely organic.

Next to Bates, Kelly is the only other cast member who seems to really be invested as he maintains Thurman’s beautiful innocence and nonsensical ramblings with aplomb. Christina Hendricks sadly proves a lacklustre substitute for the absent Lauren Graham with her deprived housewife yearnings for Thornton’s inexplicably appealing Willie (pun intended) coming off as lifeless, and both Thornton and Cox appear as if they would rather be anywhere else. The back-catalogue titles for director Mark Waters and writers Shauna Cross & Johnny Rosenthal also leave a lot to be desired as, apart from Waters’ brief dip into the mean pool with his iconic 2004 offering ‘Mean Girls’, the combined credits of ‘Ghosts of Girlfriends Past’, ‘Vampire Academy’ and ‘What To Expect When You’re Expecting’ hardly saddle an audience member with confidence.

I wanted to enjoy ‘Bad Santa 2’ – given how highly I regard the original – and the sequel occasionally offered up a hefty chuckle or two but hardly enough to warrant a full 90-minute session that makes its predecessor come off like the cheeriest of Christmas viewings.