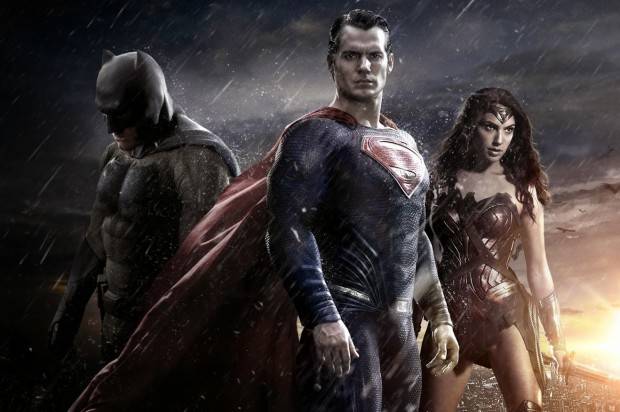 To say there’s a serious amount of anticipation behind ‘Batman V Superman: Dawn of Justice’ would be a colossal understatement. Bringing together the Dark Knight and the Man of Steel has long been a dream for both comic book fans and studio heads, and it would seem with every high-profile stumble the project took – directors McG (‘Charlie’s Angels’), Wolfgang Petersen (‘Troy’) and George Miller (‘Mad Max: Fury Road’) all subsequently failed to start their own projects – the actuality of it coming to fruition grew weaker over time. Seemingly to be in the right place at the right time, director Zack Snyder (‘Man of Steel’) can now take credit in crafting the impossible. Equally as overblown as it is ambitious, ‘Batman V Superman’ can’t quite master the tale it wants to tell but that’s not for a lack of trying.

Over a sombre credit sequence that (once again) details the slaying of a young Bruce Wayne’s parents (Lauren Cohan and an uncredited Jeffrey Dean Morgan) the film appears to start on a promising note as it projects the destruction-heavy finale from ‘Man of Steel’ from the perspective of an aged Bruce (Ben Affleck), who consequently loses valuable employees amongst the chaos. 18 months on and a senate committee has been formed to investigate whether or not Superman (Henry Cavill) should answer for his actions, which essentially wiped out the majority of downtown Metropolis. How does one keep Superman at bay though? Kryptonite, of course, and it’s just the most convenient point that a hefty load has been uncovered – a consignment that bratty billionaire Alexander “Lex” Luthor (Jesse Eisenberg), an eccentric with an obvious God complex, intends to weaponize in his bid to take the red caped crusader down.

Equally as determined to eradicate Superman is a more-bitter-than-ever Bruce who believes the son of Krypton is more sinister than saviour, and is convinced the slaying of Metropolis is only foreshadowing what could potentially prove to be a global threat. Though in the neighbouring city of Gotham corruption is still running rampant, despite Bruce’s best attempts at foiling the respective criminals under the guise of (a considerably more brutal) Batman, Superman becomes his prime objective. As we wait with bated breath for the inevitable showdown between these two supposed heroes, ‘Man of Steel’ central players Lois Lane (Amy Adams) and Perry White (Laurence Fishburne) lurk around the edges with their own specific agendas; hers being how to skew the slanderous public image now associated with her lightning-fast man-candy, and his worrying about the primary focus Clark Kent (Superman’s alter-ego) has taken on in his crusade against Batman. Then, because the film isn’t already juggling enough, there’s the mysterious Diana Prince (Gal Gadot) who shares extended gazes with Bruce and provides little necessity to the overall proceedings, even though we all know her ultimate reveal will be suitably Wonder-ful.

It’s a shame that in a movie so full of potential and so ripe with possibilities, Snyder has drenched it in such gloom and depression. I understand that the DC line-up of its proposed film universe will be drastically different from what Marvel have been serving to the public, and there is nothing wrong with that, but a little humour goes a long way and if there’s one thing ‘Batman V Superman’ is sorely missing, it’s a sense of fun. The grudge match promised in the title is hard-hitting, and kudos to the screenwriters on successfully transforming Batman into a formidable opponent to the infinitely stronger Superman, but it certainly doesn’t make it easy to barrack for either camp as they act, ironically, particularly un-heroic. There’s a bounciness missing that even Christopher Nolan’s ‘Dark Knight’ trilogy was able to muster, and only sporadically does the film feel like its promising something exciting; most notably in its presentation of hinting at the extended universe DC has planned with cameo appearances from such well-known characters as The Flash (Ezra Miller), Cyborg (Ray Fisher) and Aquaman (Jason Momoa).

As easy as it is to pick apart ‘Batman V Superman’, there are numerous positive aspects that keep the film from being a total failure. Affleck, one of the more controversial casting decisions announced in recent years, proves his naysayers wrong with a layered, albeit cynical performance that lends itself appropriately to the weary Wayne the film presents. As Superman, Cavill is near-perfect in the aesthetic form but Snyder has yet to successfully create an incarnation that feels like the hero we have come to know from previous tellings. If there’s one superhero the film manages to positively hype up, it’s Gadot’s Wonder Woman; the actress’ sleek physique lends itself perfectly to the aerodynamics of the character, and you’d be hard-pressed to not find anyone who doesn’t feel positively giddy when she enters the film in full get-up, complete with her own theme-tune. The other major additions of Eisenberg and Jeremy Irons (as Bruce’s faithful servant Alfred) are fruitful in their own manner with Irons adding a sense of levity to the usually demurer Alfred, and Eisenberg adopting a manic, twitchy hyperactivity that will potentially throw audiences off, but ultimately proves a welcome deviation from the usual bald-headed super-villain image we’re used to associating with the character.

Part ‘Man of Steel’ sequel, part ‘Justice League’ teaser, and part ‘Batman’ prologue, ‘Batman V Superman: Dawn of Justice’ suffers from trying to adopt too many identities, identities that it could potentially drive to culmination if it wasn’t trying to please every fanboy at once. At the core of Snyder’s spirit is a great film waiting to be realised, and though this cinematic battle was to showcase that greatness, we’re left with a combat that produces more of a gripe than a growl.