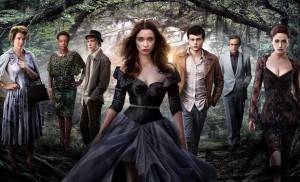 Every young adult book that manages a release nowadays, and more specifically those that spawn a film adaptation, can’t help but be compared to the saga that was ‘Twilight’, as if the vampiric love story was some sort of standard as to what all other tween opuses should aspire to be.  Now indeed ‘Beautiful Creatures’ has some minor similarities to the aforementioned series, but it deserves to be judged on its own merits and thankfully being better than a ‘Twilight’ entry isn’t a tough feat.

Set in the backwater town of Gatlin, South Carolina where religion appears to dominate, so much so that the local library has a larger list of banned books than those available, and the townsfolk there are either “too stupid to leave or too stuck to move”, highschooler Ethan Wate (Alden Ehrenreich) is intent on leaving once his study days are done.  In the meantime though he’s dealing with a reclusive father, a bible bashing girlfriend, and a recurring dream involving a girl whose face he cannot see.  When Lena Duchannes (Alice Englert) arrives for the school year it’s no surprise to us that she’s literally the girl of Ethan’s dreams, but it takes him a little longer to work that out as well as the discovery that she’s a witch (though they prefer the term caster).  As is the case with highschool Lena is instantly considered an outcast as the Duchannes name is aligned with Macon Ravenwood (Jeremy Irons), the black sheep of the town who believe his supernatural ways are the epitome of sin, who happens to be her uncle.

A romance all too quickly develops between Ethan and Lena (though it’s easily digested as Ehrenreich and Englert are particularly likeable and share believable chemistry) but as to be expected it’s a doomed romance as Lena is nearing her 16th birthday, a day in which it will be determined whether or not she is destined for the light or the dark.  For reasons unexplained, and most likely to keep the story moving, male casters can choose their path of good or evil and Macon, despite being predisposed to dark has chosen light, is determined to steer Lena towards the same fate.  Counterbalancing this is the decidedly wicked Sarafine (Emma Thompson), Macon’s sister, and her prodigy Ridley (Emmy Rossum), both of whom intend on snaring Lena to the darkside.

Through the introduction of Thompson and Rossum the film finally feels like its fuse has been lit as the two ham it up like their careers depend on it.  Thompson hasn’t had this much fun on-screen in years and she is an absolute hoot as the theatrical Sarafine (as well as the Christian fundamentalist Mrs Lincoln who Sarafine possesses) and Rossum, with her siren swag, oozes sex appeal and vastly improves this supernatural romp every time she’s on screen as its evident she knows exactly what kind of B grade fluff she’s in; in fact the tone for ‘Beautiful Creatures’ seems to be deliberately over-the-top for the most part, and when it’s not taking itself seriously, it’s quite entertaining.  Next to Thompson and Rossum, Irons occasionally chews the scenery (his on-again-off-again Southern drawl proving a hindrance) and the interiors for the Ravenwood manor feel like they’re lifted out of Tim Burton’s design book circa ‘Beetlejuice’.  There also seems to be a parody play of sorts regarding the deep south setting as Mrs Lincoln launches into her moral crusade believing those arguing her narrow viewpoint will be sent straight to the pits of hell, and the vacuous high school girls that initially torment Lena are walking clichés as they judge and criticize and pray for Jesus’ salvation.  It’s all particularly amusing in a ridiculous kind of way but it seems to work, and given how sour and down trodden ‘Twilight’ tended to be it’s at least a nice change of pace.

Not having read the series of books this film is based on I am unable to comment on how faithful it has remained, though I am to believe there have been some drastic changes, and perhaps having nothing to compare it to assisted in my relative enjoyment of what was unfolding in front of me (or maybe I have just witnessed too much cinematic crap recently) as I was pleasantly surprised with ‘Beautiful Creatures’.  By no means is this a great film though, the effects are surprisingly weak and as an overall project it felt more like a 2 hour pilot for a proposed TV series than a film, but it at least has more substance than the ‘Twilight’ series and it’s just as deserving than that was in having its own franchise.  Though with its recent release in the United States resulting in a particularly miserable reaction it has basically confirmed that this series is over before it began, a shame as there is clearly potential lurking within the post-pubescent pages of these particular creatures.