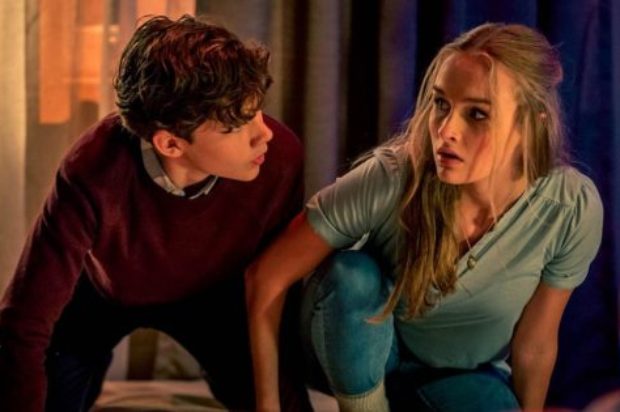 Putting its own unique stamp on the home invasion sub-genre, ‘Better Watch Out’ is a thematically disturbing but hilariously executed thriller that should satisfy horror fans seeking a little macabre entertainment during the merriest of seasons.

Despite its (pitch) black comedy temperament, ‘Better Watch Out’ is still a nasty little feature that never takes itself too seriously, yet manages to avoid becoming a parody of a genre that’s all too easy to lampoon. The basis is quite simple as writer/director Chris Peckover introduces us to 12-year-old Luke (Levi Miller) and his Christmas-season plan to woo 17-year-old babysitter Ashley (Olivia DeJonge). Believing that their 5-year age difference is nothing in the grand scheme of things, he has hopes that a few sips of wine and the mood setter that is watching a horror movie together will help him seal the deal.

With his parents (Virginia Madsen and a spectacularly odd Patrick Warburton, their opening scene sparring proving a real treat) out for the night at a Christmas dinner, and his best friend Garrett (Ed Oxenbould) taking the hint and cutting his visit short, Luke feels more confident than ever, that is until the phone lines are cut, the wi-fi network is oddly blocked, and a stranger lurking outside makes their violent presence particularly known.

As Luke and Ashley scramble throughout the house to find safety, Peckover’s film appears as if it’s going to be a rather stock-standard survivalist horror flick, albeit with a neat sense of humour, but a drastic plot development that takes place around the film’s halfway mark introduces a new, and unexpected, mentality that is sure to either make or break the film for its willing audience. Given that the film is flying under the radar the possibility of catching a trailer is slim, but if you can avoid any promotional material for it, please do! Entering ‘Better Watch Out’ without any knowledge of where the film will take you is easily the best way to enjoy this nasty treat; nasty as it is though, gore fiends may be underwhelmed with the film’s surprising lack of carnage as the acts on screen are more implied than illustrated, but the sheer unsettling tone the acts themselves adopt should be enough to keep genre fans invested.

In addition to its sense of humour, the strongest asset ‘Better Watch Out’ has is its casting. The Australian trio of DeJonge, Miller and Oxenbould all prove (mostly) capable of handling their material, with DeJonge particularly impressive in a role that sees her rise above the typical victim archetype. Miller is saddled with the most complex role, and the script asks a lot of him, and though he isn’t always completely convincing, he succeeds enough for the film to never buckle.

Thankfully avoiding any Christmas-themed cliches amongst its carnage (no death by snow globe or Santa-suited psychopath here) ‘Better Watch Out’ is a slick, fast-paced scarer that survives on its sense of humour and surprising story beats. It may not be to everyone’s taste but if you can handle your comedy black and are able to define a horror movie by its voice more than its violence, this could very well become a staple in non-traditional season viewing.