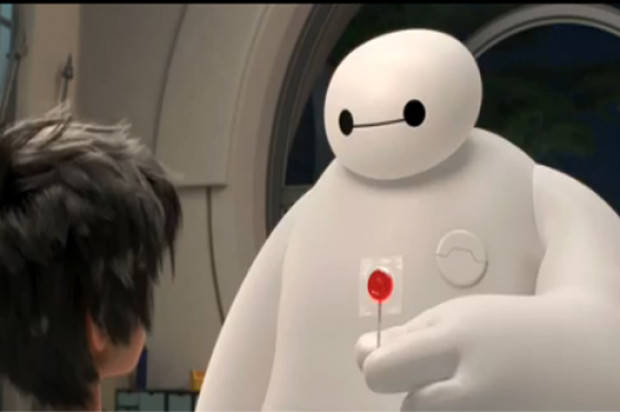 The idea of a Disney animation/Marvel hybrid will no doubt earn itself a serious percentage of expectation given how grand the last few efforts from both individual parties have been.  When comparing ‘Big Hero 6’ to Disney’s most recent offerings – namely ‘Wreck-It-Ralph’ and ‘Frozen’ – one can’t help but feel like perhaps this falls just a little short of the spectacle that those films achieved; in saying that though no-one could’ve been prepared for the monstrous response ‘Frozen’ received.

That’s not to imply that ‘Big Hero 6’ isn’t a good film though with the latest character creation from the studio, Baymax, certifying itself as one of the most lovable formations put to screen since their own Wall-E.  He’s deliriously cute in a harmless, undemanding way – much like the film itself.  Set in the futuristic, multicultural city San Fransokyo, ‘Big Hero 6’ focuses itself on young Hiro (voiced by Ryan Potter), a child genius of sorts who’s wasting his obvious talent on back-alley ‘bot-fights” with the clever, inconspicuous robot he has created.  His older brother Tadashi (Daniel Henney) is a grad-student at a prestigious MIT-type university and desperately wants Hiro to wake up to his potential as he has rejected the college-life, deeming it too nerdy. When Hiro witnesses all the fantastical inventions Tadashi and his colleagues create, he eventually aligns himself with the colourful crew and enrolls at the institute.

As to be expected with all Disney fare (and Marvel for that matter), tragedy soon strikes and our young Hiro must grow up sooner than he anticipated. When the microbot technology he has created is stolen by a kabuki-mask wearing madman, it’s up to Hiro and his tag-team of super brains to put a stop to the chaos that is destroying their city. After pimping out each of his support crew – laid-back dreamer Fred (T.J. Miller), adrenaline junkier GoGo (Jamie Chung), laser expert Wasabi (Damon Wayans, Jr) and quirky chemistry whiz Honey Lemon (Genesis Rodriguez) – with an array of weaponry, it’s the unlikely presence of the aforementioned Baymax (Scott Adsit) that proves the most beneficial. As created by Tadashi to be a medical aid, Baymax is the epitome of innocence as his function is to purely assist with medical need, so Hiro takes matters into his own hands and carves out some more helpful functions for the inflatable device which renders him far more useful in battle.

The film itself looks glorious in its rendering, and the city created in San Fransokyo is so wonderfully realized, you wish you could spend more time exploring, but ultimately ‘Big Hero 6’ feels a little more like an extended pilot for a TV series than a fully-fledged film. Not that there’s anything wrong with that though as it is still an absolute delight to watch, with this once again being a feature aimed at children that will rise some interest out of adults, but if Baymax was exorcised from the film, ‘Big Hero 6’ wouldn’t be much of an outing, especially as very little has been put in to the development of the remaining members of said ‘6’. Perhaps in detailing further adventures with this lot, and I wouldn’t be surprised if Disney had plans for a franchise, ‘Big Hero 6’ could be seen as the jump-off point for something great, but as it is, it’s an enjoyable action outing that should be better but is still miles ahead of general action fare thanks to Disney’s winning touch.