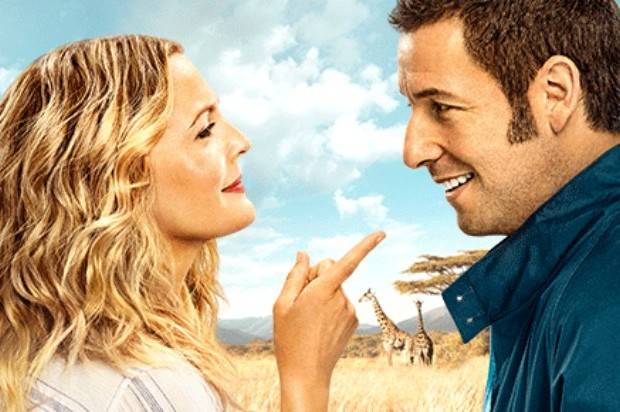 In the late 90’s/early 2000’s Adam Sandler seemed somewhat untouchable as he consistently earned top box office clout despite the majority of his films being, well…not very good. A Sandler film is critic-proof to say the least so most audiences have already made their mind up if they’re going to bother with his latest, ‘Blended’, which falls right in line with his recent outings ‘Grown Ups’, its sequel, and ‘Just Go With It’ – I excluded ‘That’s My Boy’ and ‘Jack and Jill’ as they’re on a whole other level of awful that they make this look award winning in comparison. Sandler is a decent actor when he wants to be, which makes his usual choice in film all the more frustrating as he’s capable of doing something great (‘Punch Drunk Love’ for example) but seems intent on slumming it for the sake of a decent paycheck; the man is lazy and seems to harbour contempt for his audience.

Whilst ‘Blended’ isn’t a great film by any means, it does get a few things right in that it pairs Sandler back with Drew Barrymore, arguably his finest cohort, who manages to bring a sense of heart and joy to the proceedings. Their latest match-up doesn’t begin to touch the magic they created together with ‘The Wedding Singer’ nor even ’50 First Dates’ but she at least appears to bring out something more accessible in him. The film itself – original titled ‘The Familymoon’ – begins with a rather disastrous blind date between widower Jim (Sandler) and divorcee Lauren (Barrymore). Given that they’re dining at a Hooters restaurant and Lauren is predictably arranging her babysitter to call her with an “emergency” to get her out of the remainder of the date, its evident this isn’t going well. After detailing the horror story to her friend Jen (Wendi McLendon-Covey, one of the only genuinely funny performers involved), who in turn informs of her own recent break-up with a single dad intent on introducing his kids into the picture, Lauren’s biggest concern turns to how she will treat her two sons (Braxton Beckham and Kyle Red Silverstein) on their school break given that her unreliable ex-husband (Joel McHale) has once again backtracked on his promise of taking them on an adventure vacation. Jim similarly has a trio of daughters to contend with – Hilary (Bella Thorne), Espn (Emma Fuhrmann) and Lou (Alvia Alyn Lind) – with no holiday plans locked down.

With it coming to light that Jen’s ex-boyfriend happens to be Jim’s boss, and the planned African safari Jim was counting on to act as a breaking ground for Jen and his children is left in limbo, both Jim and Lauren singularly act on negotiating to snare the tickets for their own families. Naturally this happens and both families end up in Africa unaware the other will be there. Oh the dilemma! It’s not hard to predict what will happen from here as Jim helps the over protective Lauren loosen the reign on her care-free sons whilst Lauren opens Jim’s eyes up to the fact that he has three daughters he treats like sons and that eldest daughter Hilary, who he refers to as Larry (which only spurs the thought that she’s a boy further), is dying to present herself as the woman she is. With its family mentality ‘Blended’ quite often goes for the heart and the maddening thing is that when it does this, and admittedly there a few successful ventures, it’ll revert back to opting for a cheap laugh, so scenes of Espn communicating with her deceased mother are offset by the sight of two rhinos having sex. Charming right?

I wasn’t expecting anything from ‘Blended’ so the fact that I chuckled a few times in an audible tone gives the indication the movie isn’t the worst thing I’ve seen this year, and had Wendi McLendon Covey’s character been more of the focus this would’ve easily been a recommendation but as it stands this is just another nail in the coffin of Adam Sandler’s career. He deserves to do more as an actor and we deserve more as an audience – surely he doesn’t want to end up the punchline to the kind of jokes his character ironically ridiculed in the much smarter Judd Apatow comedy ‘Funny People’?