CINEMA RELEASE: BY THE SEA 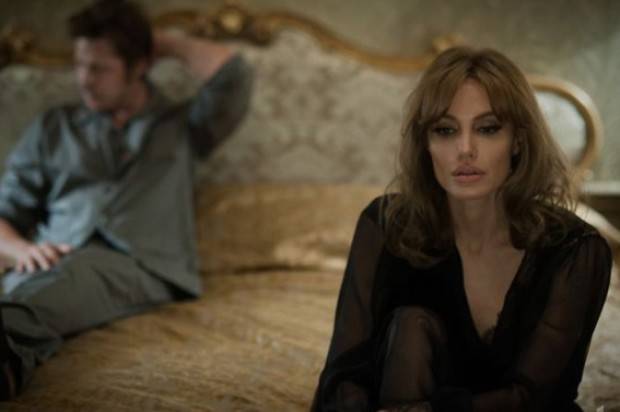 CINEMA RELEASE: BY THE SEA

There’s a distinct European sensibility about ‘By The Sea’, Angelina Jolie’s (or Angelina Jolie Pitt as she’s credited here) particularly voyeuristic drama about grief and loss that arrives a decade after she and husband Brad Pitt first set tongues and tabloids wagging with their undeniable chemistry in ‘Mr. and Mrs. Smith’. Had this movie arrived 5 or so years ago we might’ve been somewhat intrigued to watch these two gorgeous movie stars play a married couple on the verge of divorce, but in 2015, with the twosome settling down and no longer possessing the kind of limitless fascination they once held, this unapologetic vanity project just comes off as listless, unnecessary, and possessing little insight into a relationship worth investing our time in.

As Pitt’s heavy drinking, chain smoking writer Roland bides his time at the local bar, and Jolie’s pill-popping, zombified former dancer Vanessa swans about in designer gowns, oversized accessories and lush false eyelashes, ‘By The Sea’ quickly paints an unhappy image of a marriage that’s all but dead in the water. Hoping that a getaway may reconnect the two, the exquisite coastline of Malta plays host in an unspecified time (though the 1970’s seems like a safe bet) where Roland and Vanessa set up in an impossibly gorgeous villa; he hopes to mend writer’s block, she appears edgy, if not slightly suicidal, over an initially unspoken tragedy. What tragedy exactly has befallen the couple isn’t the most shocking of revelations, yet sadly Jolie waits a whole 2 hours before it’s officially mentioned.

As we wait for something – anything – to happen, the catalyst for change arrives in the form of a newlywed couple (Melanie Laurent and Melvil Poupaud) whose excitable passion for one another highlights the lack of intimacy between Roland and Vanessa as they constantly engage in heated sex acts that, unbeknownst to the couple, are being viewed regularly by Roland and Vanessa through a peephole in their adjoining hotel room. This stimulating development momentarily livens up Jolie’s film as the plethora of possibilities the story could explore threatens to pull ‘By The Sea’ out of its frozen state of pretentiousness, yet Jolie seems intent on bypassing any chance of potential plot development and ultimately leaves this strand of voyeurism as nothing more than passing amusement for the decaying couple.

In her third go-around as director Jolie is clearly hoping to emulate the style of a cinematic era long since left behind, a European aesthetic that Federico Fellini would’ve appreciated. On a visual level the film is superb with cinematographer Christian Berger taking advantage of the post-card perfect scenery and, of course, his leading stars; even in his attempt to look drunk and unkempt Pitt still appears as if he’s walked out of a Ralph Lauren catalogue. At 122 minutes the film’s lifeless pace is felt even moreso as we essentially watch two gorgeous stars mope and argue about next-to-nothing, even though Jolie tries her best to evoke an emotional response in a supposed breakdown that fails to both connect with the audience and convince us of any turmoil.

Jolie herself has said ‘By The Sea’ was never intended as a commercial release but “a delicate artistic exploration”, and perhaps in that description it will help heal the wounds she will undoubtedly bear as this impossibly gorgeous film is impossibly non-eventful. Whether you consider it a vanity project, a thoroughly misguided experimentation, or an overly manufactured melodrama, there is one thing undeniably certain that plays in the film’s favour: it is devastatingly fascinating to watch.