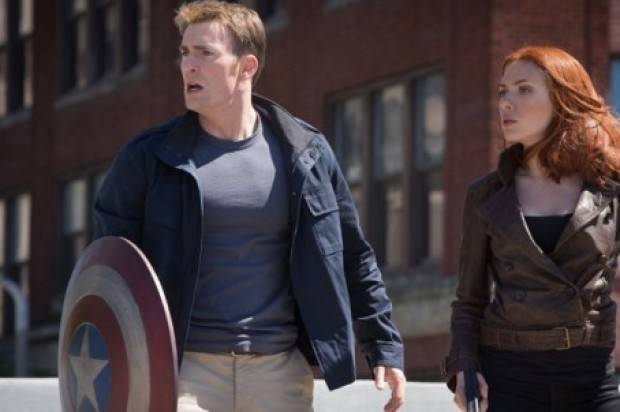 CINEMA RELEASE: CAPTAIN AMERICA: THE WINTER SOLDIER
Release date 3rd April 2014
Directors: Joe Russo & Anthony Russo
Cast: Chris Evans, Scarlett Johansson, Samuel L. Jackson, Robert Redford, Anthony Mackie, Sebastian Stan, Frank Grillo, Emily VanCamp
Classification: M (Action Violence)
Review by Peter Gray
Though I had a little comic book knowledge prior to the start of the Marvel universe in cinema, admittedly these films have been my introduction to this particular phase of superhero exploits with the collaborative ‘Avengers’ outing in 2012 still ranking as one of the greatest examples of the genre. Leading up to the release of ‘Captain America: The Winter Soldier’ there appeared to be a serious amount of hype, the kind of theatrical bedlam that now seems like a staple ingredient in a Marvel Studio release. With the infamous twist in ‘Iron Man 3’ failing to satisfy even the most devout of fans, it’s understandable that there’s now an air of caution when proceeding into one of these films, but I can safely attest that ‘The Winter Soldier’ should please the old-school fans of the original story as well as the general public looking for a smart and rewarding film.
Adjusting to life after the catastrophic events of ‘The Avengers’, Steve Rogers/Captain America (Chris Evans) is doing all he can to catch up on the last 60-or-so-years aided by a specific checklist, recommendations from his running partner Sam Wilson (Anthony Mackie), and fending off dating possibilities through Natasha Romanoff/Black Widow (Scarlett Johansson) who seems intent on fixing him up with an endless supply of eager bachelorettes. It’s these initial moments that allow the film to display its wit and charm before setting up an obligatory action sequence that sees Rogers and Romanoff assist a strike team called in to rescue a group of hostages on a S.H.I.E.L.D. ship that’s come under attack. This sequence is particularly intense and culminates in a warning for Steve to be weary of those around him.
I would be doing a great disservice to both the film and its impending audience by delving any further into the story as ‘The Winter Soldier’ manages to consistently surprise in its plot travels. With the first film, 2011’s ‘The First Avenger’, there was a sense of the old-fashioned and it played with that formula well, here it similarly adopts another era with events playing out not unlike an espionage thriller from the 1970’s – albeit with a heftier budget and modern look. With Rogers maintaining his strict moral code, the film presents an interesting dynamic for him as his quest to delve deeper into the government he thought he could trust means quite often a means to an end goes against what he stands for.
Unsurprisingly, Evans has integrated himself perfectly to the roles of both Rogers and Captain America. One in the same yes, but whether he’s the man unsure of his purpose or the superhero determined to make a difference, he’s captivating to say the least. As much as this is his movie, Johansson is given just as meatier material as the possible intention of furthering Black Widow with her own solo film project seems more feasible given how utilized she is here. In a series where the women seldom hold their own against the more outlandish male figures that have been profiled several times over, it’s a pleasure to see a female character walk equal. It certainly doesn’t hurt either that the chemistry between Evans and Johansson is so passionately realised.
A few familiar faces are on board to once again keep the Marvel universe unified with Samuel L. Jackson and Cobie Smulders reprising their roles of Nick Fury and S.H.I.E.L.D. agent Maria Hill respectively, Jackson particularly playing an important role, whilst Hayley Atwell (as Rogers’ first love Peggy Carter), Toby Jones (as the evil Dr. Arnim Zola) and Sebastian Stan (Rogers’ right-hand man Bucky Barnes) all reprise their roles from the original ‘Captain America’, with Stan’s return as the titular Winter Soldier seriously striking. Mackie as Sam Wilson, and his eventual superhero alter-ego The Falcon, is a solid new addition as is Robert Redford as Alexander Pierce, one of the big heads at S.H.I.E.L.D. who more than makes his presence felt.
Running over two hours the film could be accused of over-staying its welcome, and for a comic book actioner it definitely has the feel of a far more serious film, but they’re minor criticisms for yet another Marvel outing that outdoes its predecessor and sits high on the overall series spectrum. As to be expected by now the end credits hold a few surprises and nods to where the series will venture (this particular mid-credit sequence alludes to ‘The Avengers’ sequel) but the film itself already establishes a notable change in direction, and I for one am completely invested.
My rating 4/5 (‘Winter’ strikes hot)