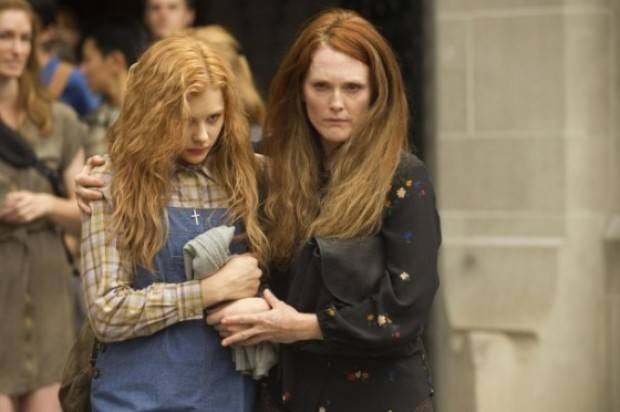 CINEMA RELEASE: CARRIE
Release date: 28th November 2013
Director: Kimberly Peirce
Cast: Chloe Grace Moretz, Julianne Moore, Judy Greer, Portia Doubleday, Gabriella Wilde
Classification: MA15+ (Strong Horror Violence)
Review by Peter Gray
The prospect of director Kimberly Peirce helming a remake of the classic horror film ‘Carrie’ could’ve resulted in something interesting given her previous material, namely ‘Boys Don’t Cry’, but a lack of emotional investment leaves this 2013 incarnation a sad, rather desperate cash-in that has practically nothing new to say. Brian DePalma created something masterful in 1976 with the original film and whilst Peirce is a competent director, her vision is far more straightforward which in turn results in a rather pedestrian product.
The story, unsurprisingly, is the same with young outcast teen Carrie White (Chloe Grace Moretz) suffering through high school at the constant taunts of queen bee Chris Hargensen (Portia Doubleday). Feeling pity for her, pretty young prom-queen-in-the-making Sue Snell (Gabriella Wilde) convinces her nice-guy jock boyfriend (Ansel Elgort) to take Carrie to the prom, unaware that Chris and her cohorts have devised a nasty plan to humiliate Carrie towards the end of the night. This would all be so easy for our mean girl crew if Carrie wasn’t harnessing her powers of telekinesis, an ability that is growing stronger by the day despite the best efforts of her devoutly religious mother (Julianne Moore).
Fans of the original will know where it’s going, you’ll even be quoting the script with many of the original lines lifted verbatim here, whilst those unfamiliar will most likely be hanging out solely for the prom scene as it seems to be no secret this is the act the film is building itself up for, and even then it’s over far too quickly with not even enough carnage to satisfy on a superficial level. One thing Peirce seems to get right is the depiction of Carrie’s high-school trauma, thanks in large part to the unfortunate “cyber-bullying” that has become increasingly more prominent with teenagers today. The infamous “period-in-the-shower” scene is recreated here, though not as graphic as what we saw in the original, with Carrie’s ordeal posted online for all her peers to gawk at. It’s a modern change that works in the film’s favour though it sadly appears to be one of the only effective nuances Peirce brings to the table.
An area where ‘Carrie’ feels like it should succeed is in its casting, however the direction Peirce takes here leaves a lot to be desired with Chloe Grace Moretz appearing too smart, too attractive, and ultimately too confident to pull the outcast angle off successfully. This isn’t a criticism on Moretz’s half as an actress, but it leaves the character far less sympathetic and more akin to a horror villain rather than the victim she was portrayed as in the original. Julianne Moore also isn’t helping matters with her scenery chewing as Carrie’s mother coming off more comical than callous, whilst Portia Doubleday and Alex Russell as the lead bullies glare and glower in typical two-dimensional style that at least can be considered successful enough to warrant wanting to see them suffer at the hands of Carrie. Faring better is Gabriella Wilde and Ansel Elgort as the nice kids sympathetic to Carrie’s plight, both delivering a believable spin on the characters portrayed by Amy Irving and William Katt in the original, and Judy Greer also proves a positive as the no-nonsense but compassionate gym teacher who looks to have Carrie’s best interest at heart.
With such a talented cast, reliable director, and strong source material at hand it really is a shame that ‘Carrie’ ended up the way it did, but at the same time are we really surprised? Horror remakes rarely live up to their promise of honouring the original and “re-imagining” the story for a new generation, so perhaps it’s time to stop looking for the future of horror in the past, and instead take note of what the past did and embrace originality.
My rating 2/5 (Stick to the original)