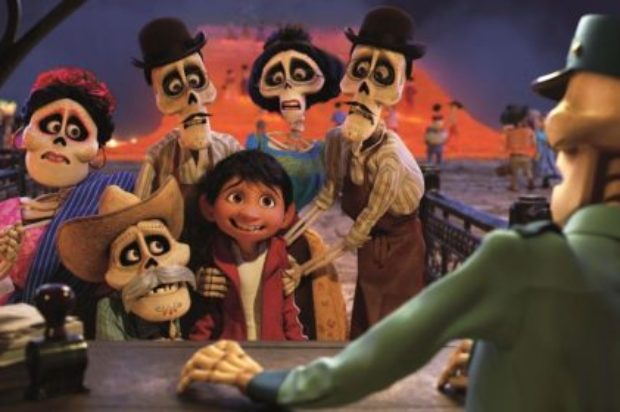 We really shouldn’t be overly surprised at this point when Pixar release yet another beautiful, thought provoking, emotionally stirring film. What’s more important is the respective film’s ranking in the overall studio canon, and if it will earn longevity (ala ‘Toy Story’) or leave little impression (2015’s ‘The Good Dinosaur’). Time will tell if ‘Coco’ has what it takes to maintain a placing in the upper regions of Pixar’s filmography, but as it stands on its own, it’s a sweeping, lovingly detailed epic of sorts that benefits from its unique setting and Latin-American soundtrack.

Similar to other original Pixar offerings, ‘Coco’ lays the groundwork for its plethora of colourful characters, detailing both their background and foreshadowing their future in an amusing open sequence that introduces us to young Miguel (voiced by Anthony Gonzalez), a hopeful musician who plans on defying the rules of his music-hating grandmother (Renee Victor) by performing in a local concert taking place during the annual Day of the Dead celebrations in their small Mexican village.

The Day of the Dead, and the various traditions linked to the celebratory event, plays a significant role in Miguel’s journey throughout the film, and due to a series of circumstances (much relating to his love of music) he finds himself “crossed over” into the Land of the Dead, an otherworldly plane where the souls of Miguel’s passed loved ones exist. As scary as this particular landscape sounds to young audiences, the film presents it in such a way that it is less a place to fear and more somewhere to celebrate; dancing skeletons, elaborate parties, and flying creatures just some of the ingredients.

Navigating this world, Miguel comes to the conclusion that the late legendary crooner Ernesto de la Cruz (Benjamin Bratt) is his great-great-grandfather, and his best chance at returning to the land of the living is to seek him out and earn his blessings. True to Pixar form, Miguel’s travels afford him two loveable sidekicks: Hector (Gael Garcia Bernal), a down-on-his-luck skeleton who guides Miguel towards his destiny whilst harbouring some secrets of his own, and Dante, a dim-witted dog who simultaneously crosses over with Miguel from the real world. The story revolving around these particular characters follows a familiar beat, but it ultimately ends up being besides the point as ‘Coco’ (the film naming itself after Miguel’s sweet-natured great-grandmother) delivers such visual vibrancy, genuine humour, and honest emotion (I dare audiences not to shed a tear during the finale) that any traditionalism can be overlooked.

Whilst the film’s pallet will keep young eyes occupied, the script from Adrian Molina (the storyboard artist for both ‘Toy Story 3’ and ‘Monsters University’) and Matthew Aldrich (the little seen 2007 Samuel L. Jackson vehicle ‘Cleaner’) tends to veer towards emotional material perhaps too mature for the usual intended audience (this is essentially an animated tale about death), and though the soundtrack is peppered with a handful of Mexican-inspired bops, their lack of immediacy in the vein of those stemmed from Disney’s ‘Frozen’ or ‘Moana’ is noticeable.

Regardless of who the film is acceptably catered to or not, ‘Coco’ is yet another irresistible fable from a studio uniquely versed in their unique ways of storytelling. Saying goodbye to those we love is never easy, and having to face that through a form of media isn’t necessarily the most pleasant experience, but such is the magic of this energetic, beautiful film, it offers a positive outlook on bidding farewell and creating an assurance that a peaceful life after death is possible.