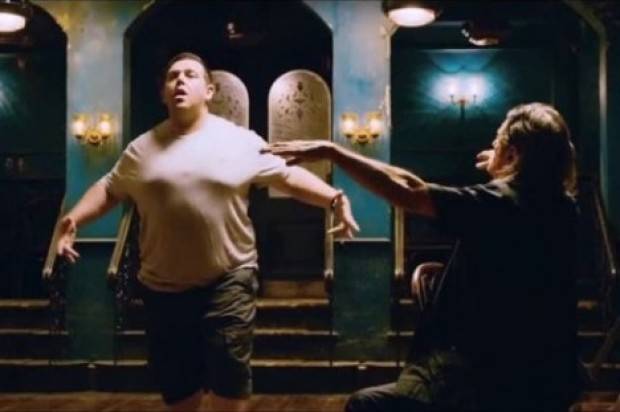 CINEMA RELEASE: CUBAN FURY
Release date: 20th March 2014
Director: James Griffiths
Cast: Nick Frost, Rashida Jones, Chris O’Dowd, Ian McShane, Olivia Colman
Classification: M (Sexual References and Coarse Language)
Review by Peter Gray
Better known for this ensemble work with Simon Pegg (‘Hot Fuzz’, ‘Shaun of the Dead’, ‘The World’s End’), Nick Frost shimmies his way into the spotlight for his solo outing ‘Cuban Fury’, a by-the-numbers underdog story that doesn’t exactly hit the perfect score it was hoping to attain. Frost is a likeable lead no question, and you want to see him succeed, but the whole thing ends up feeling like a wasted opportunity. That’s not to say it’s a bad film, it’s just not a cinematic necessity.
The set-up, based on an original idea by Frost, focuses on Bruce Garrett (Frost) who lives a particularly dull existence working for an equipment manufacturing company and trading non-sexual tales with his friends. We learn through the opening credits however that 25 years prior Bruce was on the meteoric rise through UK salsa competitions, and a bullying incident on the most prolific of competition nights saw him throw in the towel. As we all expect though his love for slick Latin moves is reinvigorated when he meets Julia (Rashida Jones), his new boss settling in from the US. Her arrival also unfortunately brings out the worst in Drew (Chris O’Dowd), Bruce’s co-worker and tormentor, who over-shares aplenty about his plan to ‘romance’ her; we’ll say romance as his actual wording isn’t print friendly to say the least.
Learning that Julia is a salsa-buff too (would she be anything else?) Bruce summons up the courage to don the sequins once more in an attempt to sweep her off her rhythmic feet, enlisting his grumpy one-time mentor Ron (Ian McShane) to administer his unique brand of tough love to re-fuel his dancing passion. There’s also his loving sister, and former dance partner, Sam (Olivia Colman) and campy classmate Bejan (a scene-stealing Kayvan Novak) to steer his focus towards victory. We all know where it’s heading and how it will end, and there’s nothing here to distinguish itself from other similarly themed outings, but you have to hand it to Frost for making it at least watchable, something achieved thanks to the ensemble cast.
Sadly the female roles – Jones and Colman – are underwritten, as is the central romance angle, but the actresses involved rise above their material with Colman suitably loving-yet-inappropriate as the advice-heavy sister, and Jones, playing a more mature version of her ‘Parks and Recreation’ character, utterly charming and completely convincing as the sole reason for reigniting a resting spark in a man that has given up on his dream. O’Dowd is likely to be the biggest issue with audiences as his usual congenial persona is traded in for a slimy, mean-spirited one who carelessly plagues Frost’s thoroughly sympathetic Bruce without so much as a thought. Obviously it’s a staple in this type of story to have the nice guy be pitted against someone more villain-like but they’ve perhaps taken it a bit too far with just how unpleasant O’Dowd comes across; it does allow for a humorous dance-off between the two though where they show off their fancy footwork in a parking garage in a bid to see who is more suited for Julia.
I liked ‘Cuban Fury’, Novak’s Bejan delivers some absolute classic lines that could be considered worth the ticket cost, but even still I know this isn’t a must-see, especially at the cinemas. There’s an undeniable energy in the final sequences thanks to the salsa-centric soundtrack, and it’s a treat to see Frost go it alone (though partner Pegg does pop up ever so briefly in an amusing cameo) but had the story unfolded in a more dynamic fashion ‘Cuban Fury’ would be more dancefloor killer than filler.
My rating 3/5 (A little more fire would’ve truly made the “Fury” ignite)