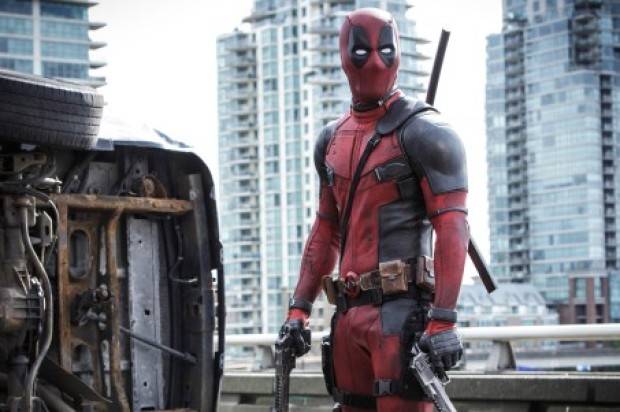 Whatever you take away from ‘Deadpool’ there’s no denying that Fox have more than made up for the slaughtering the character received in ‘X:Men Origins: Wolverine’.  With an ideally cast Ryan Reynolds returning for a feature-length go-around as the “merc with the mouth”, this unashamed, unapologetic comic-book smackdown is a movie made for the fans by the fans.  Announcing itself from the get-go as a Marvel movie unlike any other – its opening credit sequence where it does away with the traditional name check and instead lists “a hot chick”, “a British villain” and “some ass-hat” amongst others is a good indication of its mentality – ‘Deadpool’ revels in its ability to both poke fun at its own genre as well as serve as a strong entrant on its own merits.

Though under tight restraints budget-wise, director Tim Miller, writers Paul Wernick & Rhett Reese (‘Zombieland’) and Reynolds himself (the actor scoring producing credit) have had free-reign in showcasing the off-the-wall humour that serves as Deadpool’s bread and butter; the film’s more adult MA15+ rating being utilized to its full potential in the process.  Serving as somewhat of an origin film – the mouthless take on his character in ‘Wolverine’ has been erased due to the last ‘X-Men’ film essentially re-writing that universe’s history – ‘Deadpool’ zig-zags its way on-screen to catch us up to speed on how the titular character came to be.  Following a glorious opening action sequence that delivers suitably on hefty profanity and bloody violence (set to “Angel of the Morning” for good measure) we learn Deadpool’s alter-ego is that of Wade Wilson, a mercenary who signs his life away to a shadowy organization of sorts who promise they can cure him of his recently discovered cancer.  In their attempts to cure him he is riddled with heightened abilities – self-healing being one of them – but it also leaves him horribly mutilated, and given Wade’s pre-surgery vanity he is none-too-happy and swears revenge on the sadistic doctor (Ed Skrein) who performed the surgery.

When looking at it it’s quite a shallow plotline but you ultimately don’t care as it’s just too much fun overall.  Played quite exaggerated across the board ‘Deadpool’ isn’t aware of the term subtle so the majority of the cast involved perform their roles with little restriction, which ironically allows comic-relief T.J. Miller to emerge as the ensemble’s most reserved member.  Reynolds is clearly at ease as Deadpool, much more than he was in the much-maligned ‘Green Lantern’ (which gets a nice ribbing throughout this film), and his X-Men cohorts Colossus (voiced by Stephan Kapicic and motion captured by Greg LaSalle) and Negasonic Teenage Warhead (Brianna Hildebrand) lend an extra sense of levity to proceedings; them being the only X-Men on-hand is also given a nice break-the-forth-wall mention.  Morena Baccarin creates a fanboy’s dream-girl in her presentation of Wade’s supportive girlfriend and Skrein is British enough to make his slimy villain work, although you can’t help but feel he isn’t quite as imposing as he should be, his character coming off more like an evil henchman than a full-fledged anti-hero.

‘Deadpool’ has been made with a specific audience in mind and the comic book aficionados who have been supporting this throughout its production will lap it up to no end. Casual film-goers though should probably proceed with a bit more caution as its self-aware humour and un-Marvel like mentality may not be to all tastes. I wager however that ‘Deadpool’ will win new fans more than reject them as this gloriously silly film presents a brisk 100 minutes of pure entertainment and nails every beat along the way. Now when can we have that sequel?