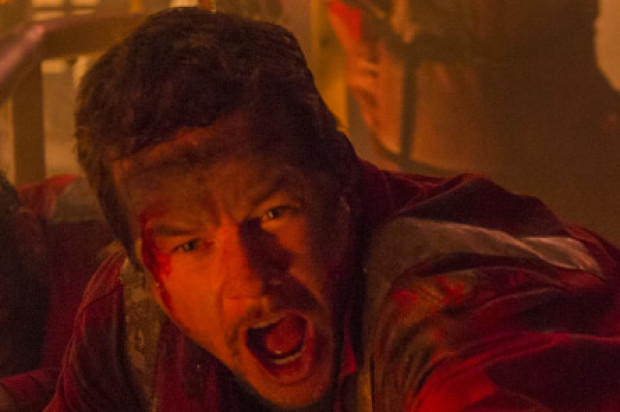 Though a lot of the dialogue is indecipherable and it’s often difficult to garner just exactly what is happening on screen from a technical view, ‘Deepwater Horizon’ is nonetheless a masterfully effective drama detailing the largest oil spill in U.S. history. Visually the film is stellar with director Peter Berg lacing the screen with haunting imagery, whether it is the rain of oil that pours down on the unsuspecting crew of the titular hull or the fire-blazed ocean that surrounds them.
Establishing his key players from the offset, ‘Deepwater Horizon’ is essentially told from the viewpoint of chief electronics technician Mike Williams (Mark Wahlberg) who opens the film in a loving embrace with wife Felicia (Kate Hudson); their relationship at once playful and dynamic. On the morning of April 20th 2010, Mike is one of many rig workers who goes about his business as usual, blissfully unaware of the precarious life and death situation that awaits him. As we learn over the course of the film’s opening 45 minutes Mike and safety operations Jimmy Harrell (Kurt Russell), who co-workers affectionately dub “Mr Jimmy”, are in a butting of heads with BP executive Donald Vidrine (John Malkovich, sporting an odd accent) who is in the business of generating profits, and given that time equals money, he’s eager for a shortcut.
As the aforementioned dialogue becomes increasingly problematic to untangle, Berg manages to keep us on the pulse of the film as there’s no mistaking the sense of dread that is born from the negative pressure tests results, and we wait with baited breath for the eventual downfall to rear its destructive head. Mud and oil flow uncontrollably as glass breaks, bodies fly, and the rig eventually erupts into a fiery hell in an intense sequence that is equally impressive as it is emotionally devastating. As Mike rises to the challenge to save those he can on board – his relationship with colleague Andrea Fleytas (Gina Rodriguez, a far cry from TV’s ‘Jane the Virgin’) is given a healthy focus during the back-end of the destruction – Berg successfully transitions (however sudden the edits may appear) to the panicked mentality of a house-bound Felicia, desperate to learn of any information she can regarding the safety of her husband.
Given the 126-heavy crew members that were on board the Deepwater Horizon, it’s certainly remarkable that only 11 people lost their lives in the process, and though it’s often a brutal film to experience, there’s a deep sense of respect for the men who were involved, resulting in an emotional resonance that stays with you long after the film has finished.