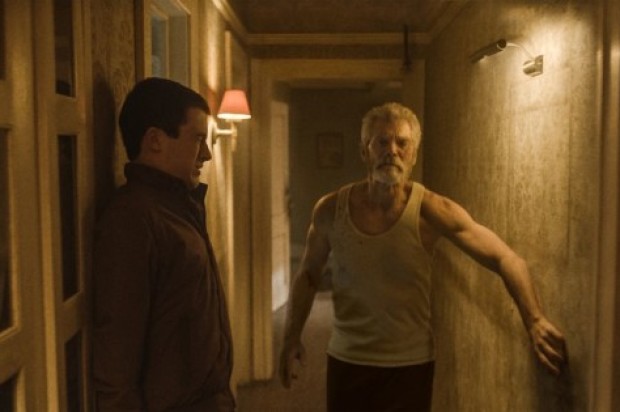 When it comes to the horror genre in 2016, it’s been an overall quite stellar year, and the arrival of Fede Alvarez’s ‘Don’t Breathe’ not only continues the trend, but solidifies itself as the strongest entry thus far. After proving himself as a proficient player in the genre with his ‘Evil Dead’ remake in 2013, Alvarez hones his strength with ‘Don’t Breathe’ by turning a run-of-the-mill home invasion thriller into one of the more twisted, sordid cinematic outings to be viewed in recent memory.

The premise here is quite simple: three lowly crim types rob wealthy neighbourhood estates in the hopes of earning a substantial payoff. When leader Money (Daniel Zovatto) hears word that a lowly property in a rundown area of Detroit is potentially housing a large sum of money, he proposes to girlfriend Rocky (Jane Levy) and her lovelorn bestie Alex (Dylan Minnette) that they claim it as their next hit; the fact that the house’s sole resident (Stephen Lang) is blind only entices them more. Once the trio is inside the house it doesn’t take long for ‘Don’t Breathe’ to establish the would-be victim – simply known as The Blind Man – as anything but a helpless target as his home harbours more than enough secrets to unnerve even the most confident of viewers.

From the very first frame there’s an immediate sense of dread that lingers over the remainder of the film, specifically when Money, Rocky and Alex enter The Blind Man’s home and it becomes quickly evident that his lack of sight has hardly hindered him; a scene where he shuts the power off to the house so the assailants are fumbling around in the dark – filmed in an intense black and white filter no less – only confirms his comfort in the shadows. Interestingly though, as much as the film appears to paint The Blind Man as a sympathetic creature (we’re given brief details on the background of his character regarding the origin of his sight-loss and the tragic circumstances surrounding the reason for his wealth) Alvarez and screenwriter Rodo Sayagues manage to create an organic transition for their set of players as we soon find ourselves sympathising with Rocky and Alex, and a particular sequence that highlights The Blind Man’s disturbing mentality only sanctions our wavering suspicions.

As she showcased through her performance in ‘Evil Dead’, Levy is one of the more game players the genre has had the pleasure of housing and to say she’s put through her paces in ‘Don’t Breathe’ is a vast understatement. Minnette surpasses his character’s simplistic outline to create the more kindly of the two male criminals with Zovatto’s Money keeping in line with his stereotypical construct. But Lang is understandably the stand-out, and the terror that he conveys with the simplest of looks is a testament to both his skills as an actor and the subtle direction from Alvarez, who maintains genuine tension throughout, only rarely resorting to a cheap jump scare for a responsive outcome; and even when he does this, it’s massively effective.

Delivering a particularly brutal feature without relying on blood and gore effects, ‘Don’t Breathe’ is a welcome reminder that horror can be handled correctly, and the genre has plenty of life left in it yet.