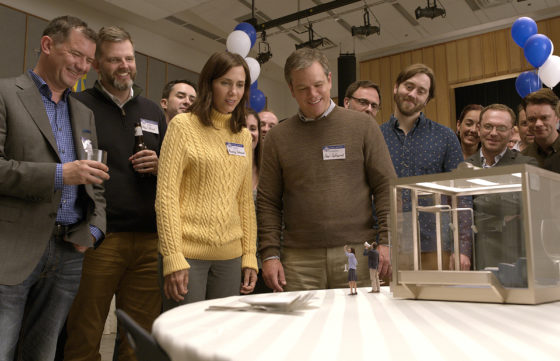 Whatever criticisms one wants to direct towards Alexander Payne’s ‘Downsizing’, one can’t deny its ambition. Perhaps it’s striving to be a bit too big and broad for its own good, but there’s an intriguing premise here at the core of a story that presents itself as a quirky comedy but ultimately survives on its directional change towards exploring more philosophical material.

Every man-type Paul Safranek (Matt Damon) lives a rather mundane, financially questionable life with his wife Audrey (Kristen Wiig) in the rather uninspired state of Omaha. Yearning for a better life (read: more wealthy) Paul is taken with a scientific breakthrough dubbed “downsizing”, an irreversible process developed some 15 years prior where people voluntarily shrink themselves to the height of 5 inches, having witnessed former school chums Dave and Carol Johnson (Jason Sudeikis and Maribeth Monroe) agree to the procedure and noting their apparent monetary comfort.

The process itself was developed so that humans, in their now-shrunken state, can live in communities that will assist in creating a more sustainable society. The consumption levels of a regular-sized person are far greater, and should you agree to the procedure, the equivalent value of your money vastly increases, meaning regular folk like Paul and Audrey will essentially be millionaires. It’s an enticing factor, and its what seals the deal for Paul; Audrey takes far more convincing, and Payne’s script never tiptoes around her hesitation, creating an air of uncertainty around her character.

The first half of the film, where we learn the origins of the downsizing process and witness Paul’s gradual integration into the community, is the more light-hearted section of the film. There’s a slight tone of satirical sharpness adopted that digs at commercialism gone astray (complete with rather amusing cameos from Neil Patrick Harris and Laura Dern as downsized spokespeople) and the film makes a strong case for the pros of the process, with Damon perfectly encapsulating both the excitement and terror of venturing into the unknown.

When ‘Downsizing’ opts to play it less for laughs and goes for sentiment, as the second half showcases, audiences are likely to adamantly embrace or deny this tone shift as it doesn’t feel organic to what came before. It does demonstrate Payne’s range as a storyteller though, and the rather sprawling international feel it adopts, as well as its apocalyptic theme it explores, means the film never feels predictable or menial. Regardless of how one personally reacts to this section of the story, one of ‘Downsizing’’s greatest assets is introduced in the form of Thai actress Hong Chau whose turn as a Vietnamese activist shrunk down against her will injects the story with heart and a more honest sense of humour. The character’s broken english could arouse criticism of racial stereotyping, but she’s performed so lawfully and with such respect that any initial skepticism towards her portrayal is done away with near-immediately.

At nearly 140 minutes ‘Downsizing’ is far more of an epic than it needs to be, and had Payne decided to focus on either a more satirical skewering of the middle class, as he does in the first half, or invested in the doomsday drama it ultimately descends to, there’s the potential that ‘Downsizing’ could’ve been one great coherent film, as opposed to the slightly disjointed, though admirably ambitious product it ultimately is.