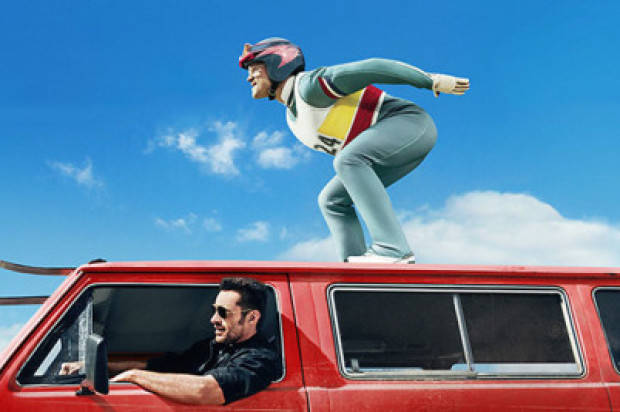 The 1988 Olympic Games certainly had their fair share of inspiring stories to tell with not only a certain Jamaican bobsledding team cementing themselves in the history books that year (brought to fruition in the crowd-pleasing 1993 comedy ‘Cool Runnings’) but also with the bespectacled underdog that was Eddie “The Eagle” Edwards, who won more than his share of hearts in the ski-jumping field despite little-to-no experience.

A plasterer by trade, as a youngster Eddie dreamed of bigger and better opportunities in life and after realising that skiing wasn’t his forte, he opted to focus on ski-jumping. By the time he hits his early 20’s Eddie (Taron Egerton) is already a decade past the average starting time for competitors in his field, but given that the UK have never competed in the ski-jumping event it doesn’t take much for him to qualify for the Olympics; though that’s not to say he doesn’t give it his all with numerous scenes devoted to the brutality of the sport. The hoops he has to jump through in order to prove himself adhere themselves to the “against all odds” mentality the film adopts, and if it wasn’t based on a true story you’d almost accuse the film of being overly sentimental to Eddie’s plight.

The actions that take place leading up to Eddie’s placement in the sport is unlikely to be something duplicated nowadays but this uplifting comedy is all about pleasing its audience with its plucky and determined spirit, and in that regard ‘Eddie the Eagle’ is a sure-fire winner. Producer Matthew Vaughn clearly has a lot of faith in leading man Egerton (this being their second collaboration following last year’s breakout ‘Kingsman: The Secret Service) and the young actor does his best to downplay his obvious good looks but he brings such sincerity and innocence to the role of Eddie that it only deems him more appealing.

Hugh Jackman, as a former Olympic ski jump champion who takes Eddie under his wing, is his usual charming self and there are neat cameos from the likes of Jim Broadbent (as an Olympic commentator) and Christopher Walken (as Jackman’s former coach) but it’s Egerton who owns the heart and soul of this simple but satisfactory story that may be emotionally manipulative but succeeds with its kind-natured approach. A little more depth to the character of Eddie wouldn’t of hurt the film but ‘Eddie the Eagle’ seems more intent on tugging at the heartstrings than delving into anything deep.

With a particularly catchy 1980’s inspired soundtrack as serviceable accompaniment, ‘Eddie the Eagle’ is likely to be the top contender for the best feel-good movie event of 2016. Turn your brain off, have your heart in the right place, and prepare for all the feels possible with this seriously charming slice of British entertainment.