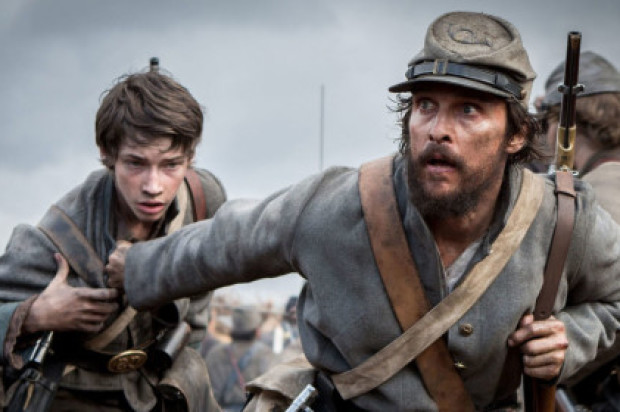 Though it has its share of award-season ingredients, and its central performance from Oscar winner Matthew McConaughey is suitably strong, ‘Free State of Jones’ is ultimately too understated to really make a lasting impression. A shame too, as Gary Ross’s historical epic certainly tells an interesting tale, one that’s remnants can still be felt today.

The story of Newton Knight (McConaughey), a farmer serving as a battlefield medic in the confederate army in the 1860’s, is ripe for cinematic telling as he turned against his own to lead a rebellion army consisting of slaves and runaways following his witness of their poor treatment at the hands of army officers. At nearly 140 minutes the film isn’t in a hurry to tell its story, and whilst there’s nothing wrong with an extended running time, it lacks any signature moment which results in the length being particularly felt.

Imperfect as the film may be it certainly never falters on intrigue, and Ross’s decision to occasionally halt the film and fast forward to the 1940’s, where one of Knight’s ancestors found himself on trial for miscegenation, is an unexpected but wise move as it pulls the film out of its static course. Knight’s ancestor wanting to marry a white woman and having it decreed unlawful due to the fact that he may be 1/8th coloured was an example of a legitimate court case, and you can’t help but wonder how much more of an interesting film ‘Free State of Jones’ would have been had this been its primary focus.

Not the stand-out epic it wants to be, but an interesting drama all the same, ‘Free State of Jones’ is likely to get lost in the current theatrical wave. There are stellar performances all around accompanying a fascinating story that, sadly, doesn’t quite execute itself with precision. A little tightening around the edges would’ve resulted in a far more effective outcome, though as it stands ‘Free State of Jones’ succeeds just enough as counter-programming for the flashier titles currently doing the rounds.