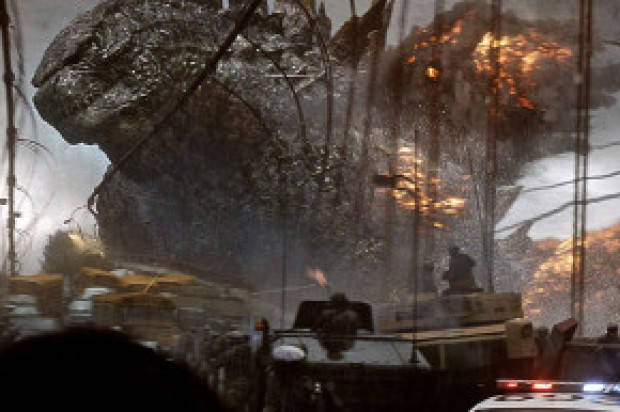 Entering a film with high expectations isn’t always the smartest tactic as more often than not they will not be met, and a critic should know this more than anyone. Getting ready for the 2014 incarnation of ‘Godzilla’ I’ll admit I was expecting greatness, and whilst this latest venture isn’t a disappointment, it was different to what I had projected in my mind. The good news though is that it is infinitely better than the disastrous 1998 outing that Roland Emmerich (‘Independence Day’) subjected the world to, and tonally the movie is handsomely balanced between grim seriousness and outlandish fun.

Another plus for Gareth Edwards’ version is the cast, with inexplicable choices like Matthew Broderick and Maria Pitilo passed over in favour of genuine, and relevant, talent with Aaron Taylor-Johnson, Elizabeth Olsen, Juliette Binoche, Ken Watanabe and Bryan Cranston amongst the human quota. It’s easy to attack the film on these grounds too as the character development is slim to say the least, and you can’t help but be a little disappointed that this particular roster haven’t been given anything substantial to do but are we really here for character depth in a ‘Godzilla’ film? In the initial stages Cranston’s nuclear physicist Joe Brody is set up as the hero of the piece, witnessing a nuclear catastrophe in Japan that catalyses events that take place in the latter half of proceedings. Cranston has that everyman quality about him that makes his character relatable and likeable, so it does come as quite a shock when the film shifts its focus to his son Ford (Taylor-Johnson), a generic soldier-type, essentially rendering Cranston’s role no more than an extended cameo.

Once Ford takes centre stage it doesn’t take long for our titular creature to make his presence felt, and though you have to wait a good 40 minutes or so to get a glimpse of him, it’s well worth the wait as the first moment he’s presented in all his glory is a spine-tingling experience. Edwards cleverly teases the imagery of Godzilla throughout leaving the overblown, destructive finale the moment we can witness him in full flight, and it’s these segments of lunacy where ‘Godzilla’ feels most alive. The last half hour of the film is arguably where Edwards’ vision is at its strongest, giving in relentlessly to the cheese factor that is this character and respecting its origins with the creature fighting hand-to-hand (claw?) combat amongst skyscrapers that look dwarfed next to his monstrous size. There’s also some unexpected (and appreciated) twists thrown our way and the CGI is simply breathtaking with Godzilla ironically coming off more human than the entire cast combined.

Whilst ‘Godzilla’ didn’t reach the dizzying heights I was expecting it to, which is more a fault of mine than the films, there’s no denying how much fun the project is overall – particularly the finale. The cast and storyline don’t inspire much recommendation but when we’re here to see a giant lizard extract carnage on an unsuspecting city, do we need anything else?