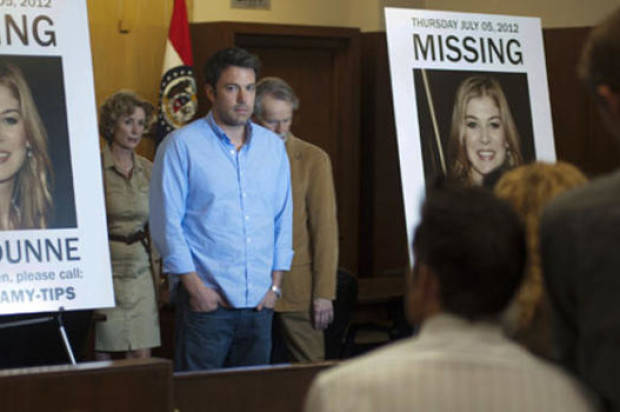 Given how unsympathetic the characters are in David Fincher’s ‘Gone Girl’, it’s quite a feat that the audience aren’t alienated in process. Somehow Fincher and screenwriter Gillian Flyyn – who also wrote the 2012 top-selling novel on which the film is based – have managed to inject a sense of pulpy fun into this cold, cynical world, and even if you’re aware of where it’s all heading, it’s near impossible to not be drawn in to the proceedings.

The secrets that ‘Gone Girl’ hides is its key to success as the mystery surrounding the film is what will draw people in, and if you are one of the many that has read the book, you should still be immensely satisfied as Fincher handles the material with an intricate delicacy. There’s a certain tawdry nature to the story itself and a great deal of the dialogue appears overly fictitious but the capable ensemble of talent on board lend credibility to it all.

A “he said/she said” mentality of sorts is formed when on the morning of their five-year wedding anniversary Nick Dunne (Ben Affleck) discovers that his wife Amy (Rosamund Pike) is missing. With signs of an in-home struggle, and Dunne’s odd emotionless attitude, suspicion soon falls to him as the media frenzy surrounding the case increases. As the evidence builds, the entanglements of his missing wife and their relationship reveal there is something far more sinister at hand than the public realise.

To disclose anything more would be a great disservice to both the film and the audience as the multiple angles in which the story is told unravel a witty, unnerving battle of “did he or didn’t he” where surprises are constant and assurance is never guaranteed. One of the more prominent angles explored is through the use of passages from Amy’s diary, which we thankfully see through the exquisite Rosamund Pike – and yes everything you’ve heard is true, she’s an absolute revelation here. This is an intensely multifaceted performance; hands down one of the most captivating of the year and, without inflicting disrespect on to the overall production, the film would be lesser without her involvement.

That being said ‘Gone Girl’ is still undoubtedly one of the year’s best, and in addition to Pike, all the females here are given stellar material. Carrie Coon, who plays Nick’s twin sister Margo, is a blast of fresh air as the heart, and voice of reason, of the film whilst Kim Dickens commands with her effortless presence as the detective investigating the case which sees her constantly battle her own beliefs on Nick’s guilt. Even the smaller supporting roles are offered meaty material with Missi Pyle a particular standout as a slithery media personality quick to condemn Nick at every turn. Not to be outdone of course, Affleck is suitably intense here, and the cold, wooden demeanour he’s often criticised for plays to his strength as the question mark over his guilt constantly wavers. Tyler Perry (who claimed to have not known who Fincher was prior to filming) leaves his Madea personality behind and impresses as the cocky lawyer assigned to Nick’s case, and Neil Patrick Harris disturbingly plays against type as a former lover to Amy who’s suspected of knowing more than he leads on.

There isn’t really a foot stepped wrong in this story that acts as a somewhat social commentary on our media-obsessed society whilst at the same time concisely uncovering the pitfalls of a marriage. ‘Gone Girl’ is indeed a nasty little film that’s as entertaining as it is wicked, and though it perhaps runs a little too long, and many may find it’s crescendo a bit anti-climactic (a purposeful tact on Fincher’s end I suspect), you’re unlikely to be more affected by a thriller this year. And if nothing else, there’s always Rosamund Pike.