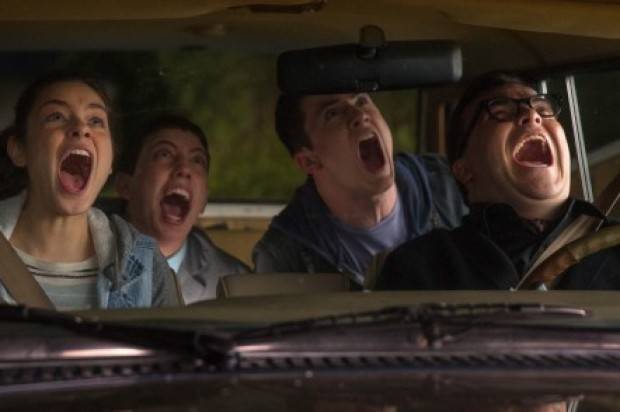 The ‘Goosebumps’ novel series was one I read religiously as a child growing up – in fact I don’t know many 90’s children who weren’t invested in this wonderfully ghoulish series – so the idea of a (long overdue) cinematic adaptation of R.L. Stine’s classic tales was one I embraced wholeheartedly. The type of subject matter that could easily fill a horror movie quota, Rob Letterman’s filmic take opts for a more family friendly mentality, perhaps in a bid to introduce ‘Goosebumps’ to a younger crowd, with sporadic dashes of scary-esque moments to not completely water itself down.

The film’s protagonist is Zach Cooper (Dylan Minnette), a surprisingly normal (i.e. not angst ridden or overtly hipster) teenager who has moved with his mother (the wonderful, but underused, Amy Ryan) to the suburban town of Greendale following the death of his father the year prior. With his mother starting her position as vice-principal at his new high-school, Zac is dreading the student body reaction and, somewhat unwillingly, he makes an instant friend in school nerd Champ (Ryan Lee). The one new aspect in Zach’s life that takes his fancy is Hannah (Odeya Rush), the mysterious but charming next-door neighbour whose father (Jack Black) is anything but welcoming.

An impromptu break-in to Hannah’s house one night – spurred by Zach’s dreaded feeling that she is in danger – leads Zach and Champ to discover that Hannah’s father is none other than R.L. Stine (a fictionalised take of course) and the ‘Goosebumps’ books he’s known for are all curiously locked away. It’s for a good reason too as Zach accidentally opens one of the books and in doing so unleashes a physical manifestation of its lead subject, in this case the abominable snowman. Naturally for films of this kind the characters aren’t too taken aback by the fact they are now being chased by a severely large creature, and soon the snowman isn’t their only problem as more and more books are opened, leading a host of ghouls, goblins, gnomes, and one seriously demented dummy (also voiced by Black) on the rampage to destroy their novel prisons and remain materialised forever.

Viewers familiar with the books are likely to find joy in the familiarity of some of the creatures featured here, and though the restrictions of a PG rating mean the violence and scare-factor are minimal, there’s enough for teen audiences and parents to enjoy themselves without feeling like they’re being pandered to; Slappy the dummy being the prime example as he’s a particularly effective villain that manages to unsettle as much as he entertains. In voicing Slappy and portraying Stine, Black is clearly enjoying himself; managing to ham it up just enough without going too over-the-top and playing off the young cast with ease. Minnette and Rush are both fine talents, young actors that actually look the age they’re portraying, and they execute their roles with a naturalness that can often be absent from young performers. Jillian Bell is also a fine addition as Zach’s kooky aunt, the actress keeping her infectious comedic presence hinged following her more adult-oriented appearances in ‘The Night Before’ and ’22 Jump Street’.

Overall ‘Goosebumps’ is a fun time out at the movies, particularly for families. The scares are light and the violence is near non-existent but there’s still a certain darkness that lies underneath the surface that keeps this from being completely for the kids. It’s a creative adventure outing that will hopefully inspire today’s audiences, most likely unfamiliar with the original source material, to go out and buy a book – or at least download the e-book.