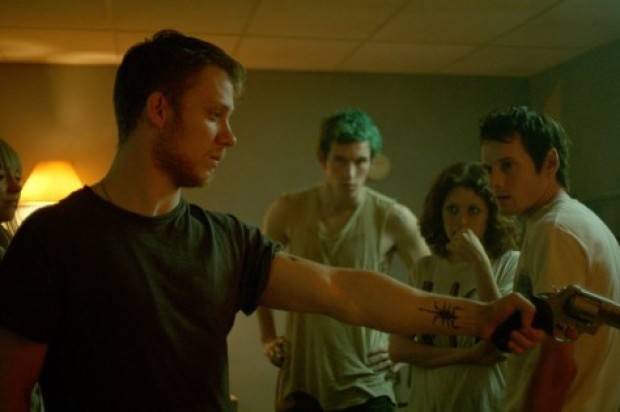 Tightly coiled and vastly intense, ‘Green Room’ is a vicious attack on the senses that doesn’t let you go once it wraps its macabre hands around you. Bringing to mind classic filmmakers like John Carpenter (‘Assault on Precinct 13’, ‘Halloween’), the film bases itself almost entirely in the titular space as director Jeremy Saulnier lets the tension boil before lacing the screen with brutally realistic violence that, thankfully, feels more organic than gratuitous.

Whilst the violence is effective (there are some seriously graphic moments involving a box-cutter) it’s Saulnier’s ability to evoke a sense of relatability with the film’s victims-in-waiting that really allows ‘Green Room’ to stand out in its respective genre. How he has managed to convey a real sense of family between the characters without detailing them is a testament to his skills as a writer, and to sell the film’s outlandish concept of a non-conformist punk band performing for a crowd of neo-Nazis – complete with a set-starting “Nazi Punks F**k You!” cover – with a sense of ease only reiterates his talent.

Though the film isn’t in a rush to unleash its carnage, it certainly doesn’t take long for our struggling punk band to find themselves locked in a battle of life-and-death after they unintentionally witness the repercussion of a murder. Tensions flare and panic escalates as the band plead with the club staff to let them go, and although they are assured by the intimidating voice of owner Darcy (a brilliant Patrick Stewart) that the situation will be handled respectfully for all involved, it’s uniformly evident his intentions aren’t pure.

The casting is one of ‘Green Room’s strongest assets with Stewart – playing wonderfully against-type as the Nazi group’s level-headed but cold-blooded leader – leading the charge. Of the punk band it’s Anton Yelchin and Alia Shawkat that emerge as the most likeable, with Yelchin appearing the most sensible as their unofficial leader and Shawkat adopting a mother-hen mentality that makes her instantly affable. Callum Turner, as the lead singer, and Joe Cole, as their drummer, assume the more brass, alpha-male personalities that ordinarily would render them unpleasant but they both manage to transcend their stereotypes and create characters you root for. Also a treat is Imogen Poots as an alarmingly personable skin-head groupie of sorts who emerges as a semi-heroine, one that indeed gets the audience on her side despite reservations about her character.

As much praise as I can give to ‘Green Room’ it does need to be noted that this is far from a pleasant film (it’s R18+ rating is earned), and not something that will necessarily cross over to a wider audience. Its niche target however should lap its tight blend of action, horror and drama up in spades and lay the foundation for a title that has “cult classic” written all over it.