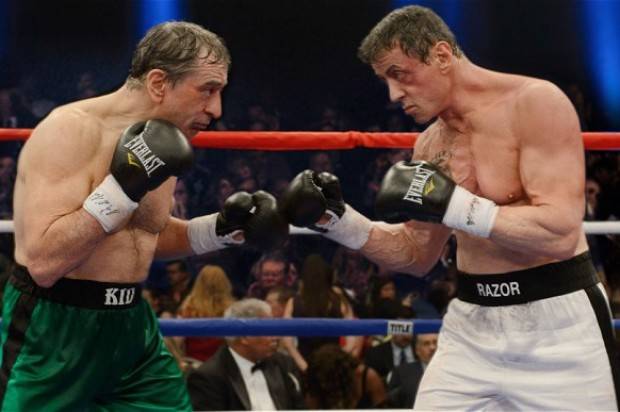 CINEMA RELEASE: GRUDGE MATCH
Release date: 30th January 2014
Director: Peter Segal
Cast: Sylvester Stallone, Robert DeNiro, Kevin Hart, Kim Basinger, Alan Arkin, Jon Bernthal
Classification: M (Sporting Violence and Coarse Language)
Review by Peter Gray
Despite the iconic status Sylvester Stallone and Robert DeNiro achieved in their heyday portraying boxers (respectively with ‘Rocky’ and ‘Raging Bull’) ‘Grudge Match’ is far from the cinematic knock out it could’ve been given the potential. Since last appearing on screen together almost 20 years ago in ‘Copland’, Stallone and DeNiro have had vastly opposite careers with the former trying to hold on to his action man status and the latter coasting through on underwhelming roles save for the occasional powerhouse part, so whilst it wasn’t out of the question to think a reunion between the two would be underwhelming in itself, it certainly didn’t need to be as witless as what we have here.
Treading where Walter Matthau and Jack Lemmon have gone before with their ‘Grumpy Old Men’ outings, ‘Grudge Match’ focuses on “frenemies” Henry “Razor” Sharp (Stallone) and Billy “The Kid” McDonnen (DeNiro), two former boxing champions – and lifelong rivals – who just can’t seem to survive without the other being around to insult. After we get caught up to speed on their individual personalities, Henry’s the sensitive one who makes a living working blue collar jobs and sculpts animals out of scrap metal in his spare time whilst Billy is more the showman milking his former fame for all it’s worth with endorsements and a cheesy themed bar amongst his catalogue, the duo are unwillingly brought back together when the money hungry son of their former manager (Kevin Hart, seemingly channelling early Eddie Murphy) convinces them to lend their likeness to a video game. When the two go mano-a-mano on set, decked out in green leotards for the intended green screen work, it’s captured on video for all to see, leading to a viral campaign that re-energises the public’s interest in them.
As said before ‘Grudge Match’ is the kind of film that should’ve been better but there’s no surprise in its obvious structure. It’s sad that this is the kind of film DeNiro is reducing himself to these days as his immense career of work really does earn him the title of one of the greatest actors of his generation but here he’s clearly slumming it. I can say though that he at least appears to be enjoying himself, and though Stallone is the more physically attributed of the two, DeNiro comes off more youthful and sprightly. The film has a few solid moments peppered throughout which focus on DeNiro and his estranged son (an ideally cast Jon Bernthal), and though these scenes don’t present anything we haven’t seen before, the two play well enough off each other that you can’t help but think in a stronger production there could’ve been something of genuine worth between them.
As for Stallone, well he just seems bored. Sleepwalking through his part with the energy of a coma patient, the actor is running on empty, not helped by the fact that his already indecipherable tone is presented in glorious monotony. You can’t really blame him given what he has to work with but even in scenes with the wise-cracking Alan Arkin (as his unlikely trainer) and the still gorgeous Kim Basinger (his love interest) there’s barely a flicker registered.
‘Grudge Match’ could’ve been a halfway decent film, or at the very least a dumb, fun comedy, but there’s very little on offer here that renders it a necessity. I’ll admit I chuckled a few times throughout, and the scenes between Bernthal and DeNiro hold up nicely enough, but it’s all so generic and uninspired that it’s probably best left to a Sunday DVD viewing when you need something light on in the background to keep the afternoon moving.
My rating 2/5 (Match is more geriatric than grudge-worthy)