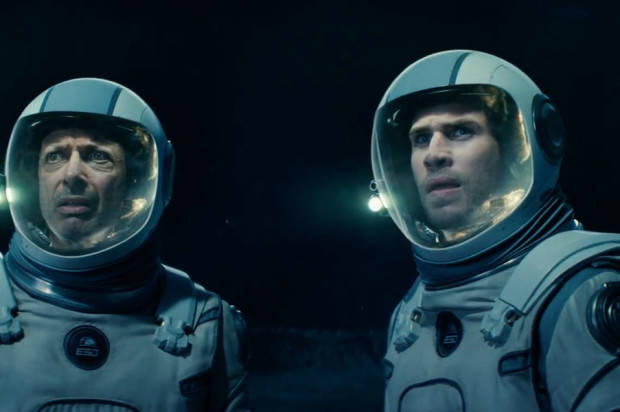 There’s an extended sequence in ‘Independence Day: Resurgence’ where an all-powerful queen-bee alien is chasing a Jeff Goldblum-driven school bus across the desert, somehow finding itself unable to keep up with his wild driving skills despite swatting down fighter-jets only moments earlier with unspoiled precision. It’s one of the many moments this large, loud sequel offers without a hint of gravity and, honestly, it’s what makes this film so much damn fun. Refusing to take itself seriously by likening itself to its 20 year-old predecessor, ‘Resurgence’ thrives on its penchant for nostalgia.

“We always knew they’d be back”, the tagline ‘Resurgence’ so gleefully plays with, serves as not only a catchy selling point but both an unconscious observation on the inevitability of sequels and a simple summation on what to expect: the aliens are back and mean serious business. Whilst we wait for the expensive moments of international landmarks to fall victim to the relentless race of aliens we so foolishly thought to have conquered at the hands of Will Smith’s cocky pilot in the original – his character’s absence briefly noted – a colourful cast of players (both old and new) are inserted into the proceedings to line themselves as either eventual saviours or victims. Next to Goldbum’s returning scientist David Levinson, Bill Pullman and Brent Spiner make for the most recognisable repeat offenders as the former President of the United States and unkempt scientist Brackish Okun respectively, both of whom had a major impact in the original film’s defeat. Fresh meat arrives in the form of Liam Hemsworth’s fighter pilot Jake Morrison, whose typically reckless ways make him the perfect candidate to lead the charge in 2016’s fight against the extra-terrestrials.

As much as the five credited screenwriters try to add weight to their heft of characters by creating conflict or pushing romantic angles, all of it is for naught as this film purely exists to stimulate us on a visual level; and Hemsworth pissing on the deck of the alien spacecraft whilst flipping them off gives us more of a character insight than his romance with the former President’s daughter (Maika Monroe) ever does. Logic takes a backseat and the cheese is laid on extra thick, and though a subplot involving an additional alien race that actually wants to befriend us and assist in the fight to save humanity offers up potential interest, it appears anything remotely intellectual is being spared for the hinted-at threequel, leaving ‘Resurgence’ to survive on brawn and overblown battles.

In a year that’s been considerably sequel-heavy, ‘Resurgence’ ultimately won’t rise as the best or the worst continuation, it merely exists on its own planet where it survives on its good-nature and refusal to take itself seriously.