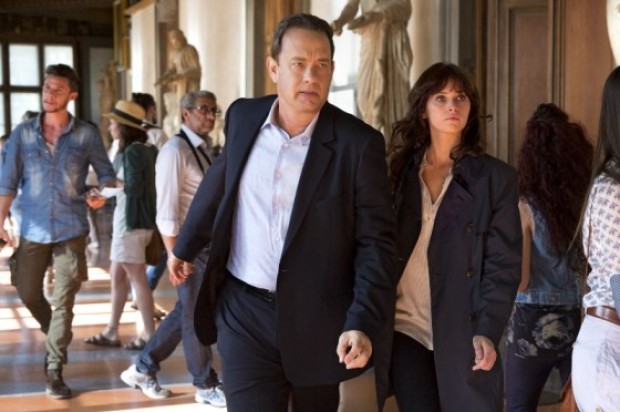 If you responded positively to Ron Howard’s cinematic takes on Dan Brown’s best-selling novels ‘The Da Vinci Code’ and its follow-up ‘Angels and Demons’, then chances are lightning will strike thrice for you with threequel ‘Inferno’. If you, like myself, were unenthused with those incarnations then this latest European mystery won’t prove that enticing as it’s very much playing within the guidelines of its predecessors.

Given that Brown’s novels are a blend of superficial fact and fiction, it would make sense that Hollywood would eat up their popcorn thriller mentality. Whilst I was personally underwhelmed by ‘The Da Vinci Code’ (2006) (a case of too-much hype perhaps?) I admittedly had more fun with ‘Angels & Demons’ (2009) as Howard seemed to embrace the melodramatic lunacy of it all; though my enjoyment of the film didn’t blind me to the fact that it still wasn’t a terribly strong picture.

As gripping and as investing ‘Inferno’ wants to be, it sadly can’t overcome its shortcomings in that its characters just aren’t interesting enough to support anything of any real depth. You can edit your story as frantically as you wish, and throw in as many European locales as possible (though they’re hardly given any chance to shine), but the smoke and mirrors aren’t convincing enough to deter us from the fact that David Koepp’s script is really quite poorly compiled. It starts off promising enough though as series hero Robert Langdon (Tom Hanks), a Harvard University professor specialising in religious iconology, wakes up confused and hallucinogenic in a hospital room; he has an apparent gunshot wound along the top part of his head and within moments his life is in imminent danger.

Through the assistance of the all-too eager Sienna Brooks (Felicity Jones), the doctor who was treating him during his comatose state, Langdon pieces together that he’s on the search for a deadly pathogen created by crazed millionaire Bertrand Zobrist (Ben Foster) in an attempt to lower the world’s population. Despite his broken memory and inability to remember simple things like “coffee”, Langdon summons the smarts to decipher that the whereabouts of said pathogen is hidden in the writings of Italian poet Dante.

Though cracks in logic start to show it’s evident that there’s a decent enough story here to keep the mystery moving at a pleasant pace, so it’s both disappointing and confusing that the action is presented so pedestrianly and the film feels the need to spell everything out for an audience it clearly has no respect for. Continuing 2016’s streak of disappointing blockbusters, ‘Inferno’ tries to present itself as more than just a polished ‘Indiana Jones’-type adventure but sadly can’t overcome its temperament that it’s nowhere near as intelligent as it wishes to be.