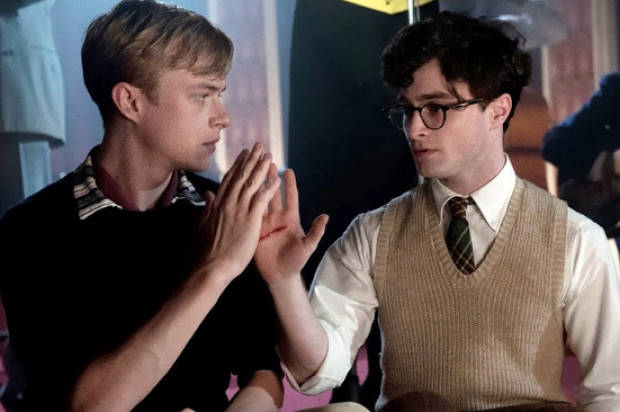 CINEMA RELEASE: KILL YOUR DARLINGS
Release date: 5th December 2013
Director: John Krokidas
Cast: Daniel Radcliffe, Dane DeHaan, Michael C. Hall, Elizabeth Olsen, Ben Foster
Classfication: MA15+ (Strong Sex Scenes and Drug Use)
Review by Peter Gray
If it wasn’t already established it’s safe to say that now, more than ever, Harry Potter is all grown up. Continuing to prove his worth as one of his generation’s brightest talents, Daniel Radcliffe strips away all modes of fear and vanity to play legendary writer Allen Ginsberg in John Krokidas’ fascinating ‘Kill Your Darlings’. As brave and as impressive Radcliffe is though, Dane DeHaan, arguably the films least known star, triumphs as the real centrepiece delivering a broody and intense performance that solidifies him as a future star.
Set in New York in 1944 when Ginsberg was just another young student hoping to make good by following in his father’s footsteps, the troubled Lucien Carr (DeHaan), an anti-conformist who had a habit of bouncing from one school to the next, proved both an unlikely ally and necessary influence. Quickly introduced to Carr’s inner circle (which includes Ben Foster as a drug-stupified William Burroughs, and Jack Huston as author Jack Kerouac), Ginsberg is seduced by Carr’s gaudy ideas of breaking the literary rules, despite the fact that he rarely finishes his own work, instead using his friend, and former lover, David Kammerer (Michael C. Hall) to do the work for him.
The burgeoning friendship between Ginsberg and Carr is what most of ‘Kill Your Darlings’ is spent focused on, with Ginsberg struggling to understand his own sexuality and feelings for the abandoned Carr, who in turn leads Ginsberg further into a dark world of misbehaviour, and it’s through Carr’s penchant for using other people for his own self that eventually brings about the tragedy hinted at in the film’s opening frame: the murder of Kammerer. As we all know it’s an act that is coming, ‘Kill Your Darlings’ has a way of keeping us intrigued to see just how it will eventuate, but once it comes to play admittedly the film lets itself down as it appears to be in too much of a hurry to wrap proceedings up.
The look of the film is gorgeous though with 1940’s New York lovingly reproduced as a jazz-central hub of artistic expression, and the supporting cast is just too good with Jennifer Jason-Leigh, David Cross and Elizabeth Olsen adding much depth to the production. It’s DeHaan though that reigns supreme with a sexual intensity thrust behind his sleepy yet animalistic eyes, and an overall magnetism that makes it utterly feasible to understand why so many people were drawn to him. With a little spider-slinging superhero film on the way next year, it’s evident the star, like Radcliffe, will find a healthy balance between blockbuster productions and smaller, more indie-type affairs without compromising artistic integrity.
My rating: 3.5/5 (Potter graduates)