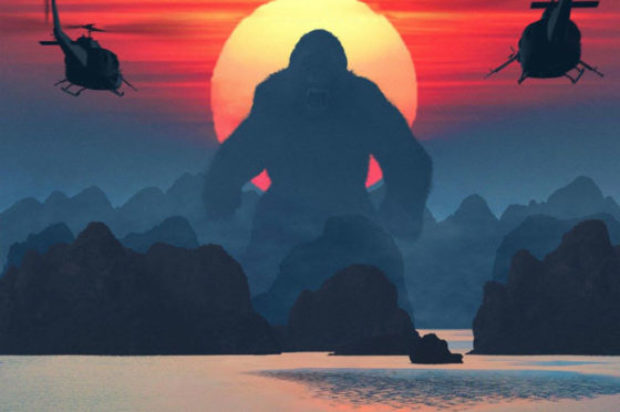 Revamping the classic beast that is King Kong, director Jordan Vogt-Roberts (drastically changing tunes following his indie sleeper ‘The Kings of Summer’) moves away from the traditional formula and confines the action to Kong’s homeland, the titular Skull Island, where Vogt-Roberts and the screenwriting duo of Dan Gilroy (‘Nightcrawler’) and Max Borenstein (2014’s ‘Godzilla’) delight in presenting Kong’s presence as both predatory and protective.

Set towards the end of the Vietnam War (cue period-appropriate soundtrack), ‘Kong’ wastes very little time in setting up its reasoning to visit Skull Island, with John Goodman’s well-intentioned scientist wanting to explore the territory for its resources. Given how dangerous Skull Island is expected to be (and very much is in actuality), Samuel L. Jackson’s Colonel Packard is called upon to lead the troupes – both his own soldiers and the various crew members on the expedition – through their paces. After a particularly well-choreographed air -battle sequence between Packard’s flight crew and an angry Kong results in a heft of casualties, Packard’s motivation shifts from responsibility to retribution as he vows to hunt the mighty Kong down.

As it becomes quickly evident that Kong is far from the deadliest presence inhabiting Skull Island, the vast array of creatures, both fantastical and fatal, that come courtesy of the film’s VFX crew allows the numerous action sequences to at once amuse and shock viewers with a mentality that feels far more adult than the M rating implies; the infamous 1980 exploitation feature ‘Cannibal Holocaust’ is a clear inspiration. And whilst some of the effects aren’t always seamless, the expressive appearance of Kong himself certifies this latest creation as the most operative yet.

As was the case with the recent ‘Godzilla’ (which acts as something of a companion piece to this film, with the eventual goal for the two creatures to collaborate), the human cast ultimately play second fiddle, though the players assembled here are far from unimpressive. Next to Jackson’s typical gung-ho solider, Tom Hiddleston proves a nice contrast as the softly-spoken hero and Brie Larson, in her first role since netting the Oscar for ‘Room’, injects an affability into her underwritten role to emerge as more than just a damsel in distress. Out of everyone though, it’s John C. Reilly who fares the best as a downed WW2 pilot who has been living on the island for nearly 30-years; though it’s easy to peg him as the comic relief (and he garners the best lines) there’s a great deal of heart inoculated into the role, leaving him and Kong as the two characters you’ll remember the most.

‘Kong: Skull Island’ comes with a pedigree more advanced than what a project of this ilk deserves, and if you enter expecting any type of realism or subtlety (although being a King Kong feature, I don’t see why you would) you will be greatly disappointed as this kinetic actioner is all brawn and no brain. A B-movie to the core, ‘Kong: Skull Island’ may not prove to be the most essential trip for cinema travellers but it’s entertaining enough for those that enjoy their creature-features loud, violent and senseless.