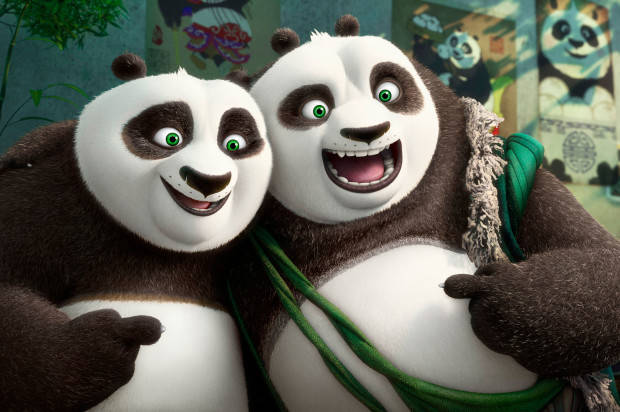 A series that continues to blossom like its own unlikely hero, ‘Kung Fu Panda 3’ blends beautifully rendered hand-drawn animation with crisp 3D computer generated technology to create a heartfelt, and often hilarious, tale of courage and discovering one’s self-worth.

Much like its joyful duo of predecessors, ‘Kung Fu Panda 3’ works with a premise that is both silly and sublime as the lovable Po (voiced by Jack Black), now noted as the Dragon Warrior, has to face off against a hard done-by yak (a suitably evil J.K. Simmons) who escapes from the spirit realm with an army of jade warriors intent on collecting power-yielding chi in a bid to conquer the mortal realm. If that’s not enough for Po and his five-some of sidekicks, comprising of Tigress (Angelina Jolie), Monkey (Jackie Chan), Mantis (Seth Rogen), Viper (Lucy Liu) and Crane (David Cross), a portly panda named Li (Bryan Cranston) visits Po’s village exclaiming to be his biological father, a should-be joyous occasion that Po’s adoptive dad Mr. Ping (James Hong) doesn’t take to with enthusiasm.

One of the series’ strongest charms has been its assortment of central characters, the kind of creations that shouldn’t be working together in (relative) harmony but are – perhaps against their better judgement. Black, a character actor who all too often is unable to compose his comedic flair, is wonderfully suited to the enthusiastic and good-natured Po, and the chemistry that is generated amongst the cast through their vocal work is a testament to their genuine passion to this wonderfully simple, yet effective series. Simmons, with his deep boom of a voice, and Cranston get the most mileage out of the new players (Kate Hudson, who replaced Rebel Wilson during production, is relatively sidelined in a brief but playful role as a seductive panda known for her ribbon dancing) whilst Jolie’s sensible Tigress is the only other recurring member that’s able to utter more lines than audible grunts from Po’s motley crew; Dustin Hoffman rounds things out as their long-suffering Master.

If the series hasn’t hooked you by now then this third go-around is unlikely to sway your opinion as the film very much falls in line with the previous tales, but as much as it feels familiar, there’s a certain freshness peppered amongst the frenzied action that allows the film to stand on its own and not feel like a carbon-copy of the stories that came before. Expectedly big on heart and the importance of family, ‘Kung Fu Panda 3’ is a winning continuation of a series that has far more life than one would expect.