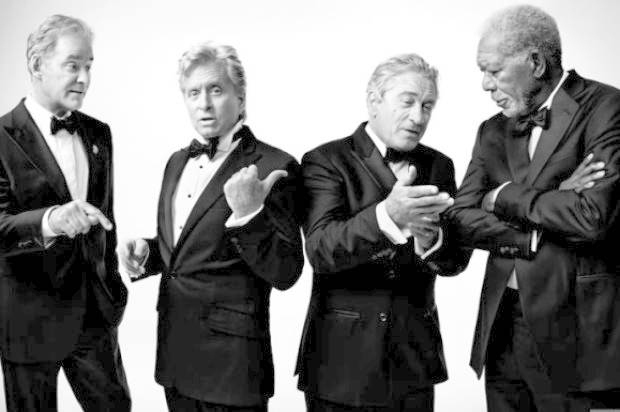 CINEMA RELEASE: LAST VEGAS
Release date: 6th February 2014
Director: Jon Turteltaub
Cast: Michael Douglas, Robert DeNiro, Kevin Kline, Morgan Freeman, Mary Steenburgen, Roger Bart, Jerry Ferrara
Classification: M (Coarse Language and Sexual References)
Review by Peter Gray
No doubt pitched to movie executives as ‘The Hangover’ for geriatrics, ‘Last Vegas’ is one of those films that should be a lot better, given you have a quartet of Oscar winners on hand in Michael Douglas, Robert DeNiro, Morgan Freeman and Kevin Kline, yet at the same time delivers exactly what you’d expect from the ho-hum trailer, which in some regards makes this a (specific) crowd pleasing success.
With a background in more family-friendly fare – ‘Phenomenon’, ‘The Kid’, the ‘National Treasure’ series – director Jon Turteltaub surprisingly gives the film a little raunch (though not too much as to upset the masses) and manages to mostly avoid going overly thick on sentimentality, allowing the cast to enjoy themselves. If there’s one thing the film has going for it it’s enthusiasm as our established leads are clearly having fun bouncing off each other, and you can’t help but think the ‘making-of’ process for ‘Last Vegas’ would be where the real entertainment lays. As it is though Douglas and DeNiro play to type at ease, with Douglas as Billy, a slick womanizer looking to marry a woman less than half his age, and DeNiro as his grumpy friend/foe Paddy who holds a grudge following Billy’s decision to forego his beloved wife’s funeral many years earlier. Admittedly there’s some fun to be had with the two as they insult each other and attempt to out-do the other, specifically when it comes to winning the hand of a sultry Vegas chanteuse (a delightful Mary Steenburgen) they encounter when they hit the city of sin for Billy’s bachelor party.
Kline and Freeman appear even better as the two ‘under-the-thumb’ members of the crew (Kline by his wife, Freeman by his over-protective son) who look at Vegas as their ticket to freedom, with Freeman’s Archie enjoying the intoxicating seduction of betting and boozing whilst Kline’s character of Sam views the city as his fornicating playground when his wife slips him a condom and a Viagra pill, leaving him with the grand old saying of “what happens in Vegas, stays in Vegas”. Freeman is always so serious in his work so it really is a treat to see him cut loose, and Kline, who has been away from comedy for too long, happily reminds us why he’s such a likeable presence on screen – even when his actions are questionable. Adding some much-needed femininity to proceedings is the aforementioned Steenburgen, who at 60 years old still looks fantastic, and it’s her scenes with the group, and specifically Douglas and DeNiro, that adds real warmth to the overall production.
Whenever the film teases something genuinely raunchy Turteltaub pulls back and, as a result, the film feels slightly stifled and more akin to something from the 80’s, and the numerous musical montage sequences don’t help. I’ll fully admit to not being the key demographic for this film, and that’s perhaps why I didn’t find this as funny as I wanted to, but the audience I saw it with were in hysterics, and really that’s the best judge of a film’s success, and with that ‘Last Vegas’ can’t be deemed a failure overall. The ending alludes to the possibility of a sequel, and if that so happens to be the case, I can only hope the film is just as well cast as the teaming of Douglas, DeNiro, Freeman and Kline is really what saves this trip from being a disaster.
My rating 3/5 (Target audience happy to travel)