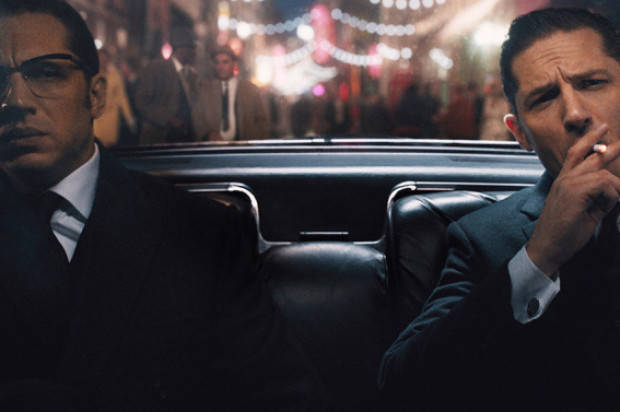 In ‘Legend’ it seems that Tom Hardy has perhaps found his ideal co-star – himself. Clearly given free rein to explore the infamous British gangster twins Ron and Reggie Kray, Hardy proves himself both a certified movie star and a dedicated character actor as he effortlessly tackles the duo. The Kray boys themselves won’t be the most familiar figures to the general public but in Britain there was a certain magic to them, they were homicidal without question but they sure had style.

Much like the Krays, ‘Legend’ is a film oozing with flair, unfortunately though all its flashiness overruns any substance writer/director Brian Helgeland (screenwriter of such fare as ‘L.A. Confidential’ and ‘Mystic River’) tries to inject into a story that feels all too familiar. Set in the swinging 60’s of London, the Krays dominated the criminal underworld, their hands in various nightlife businesses to maintain their finances. Reggie was the more honourable twin (at least initially), suave and sophisticated, he was the brains of the two. Ron, with his psychotic outbursts and oft-indecipherable mumble, appeared like the braun yet Hardy evokes certain sympathy from the audience as his stunted mental deficiency masks the caring nature he sporadically displays.

Of the two it’s tough to narrow down just which is the showier part for Hardy. Ron is the louder character, his unexpected lapses into violence and constant psycho-ticks clearly being revelled by the star, similarly his unapologetic homosexuality (with Taron Egerton of ‘Kingsman’ as one of his lovers) provides a healthy dose of unexpected humour as he uses this fact to disarm a series of conservative mob bosses (one played by Chazz Palminteri). As Reggie, Hardy ups the charm and cuts an almost Bond-like figure as he swans about the underworld in impeccably tailored suits, delighting in the lifestyle his crimes have afforded him but still taking caution on the unpredictable nature of his brother; one such example being the mad whim Ron possesses to fund his own city in Nigeria.

As electric as Hardy is, ‘Legend’ can’t help but crack under the pressure of providing an interesting film without his involvement as whenever Hardy is absent from the screen, it all starts to feel a little pedestrian. Helgeland does his best by introducing the character of Frances (Emily Browning), Reggie’s eventual wife, who unnecessarily narrates the film and comes off a little bit boring as she tries to settle down with a man who can’t help his animalistic instincts. Browning turns in an acceptable performance, and her character grounds the film momentarily, but the side-plot of her family disapproving of her relationship with Reggie brings little originality to the proceedings. Likewise the delving into the law and order side of things brings little colour as the plethora of side support characters aren’t nearly fleshed out enough to make an impact; David Thewlis as the Krays’ business manager being the exception.

At over 2 hours the film finds trouble maintaining the fire it fans so delightfully in its first half, with its violent content seemingly escalating as it continues resulting in one of the most brutal, not to mention graphic, stabbings put to screen in recent memory. It’s an imperfect film, but Hardy is just so damn good that it’s hard not to give it a recommendation for those who like their gangster movies with a healthy mix of grace and grit.