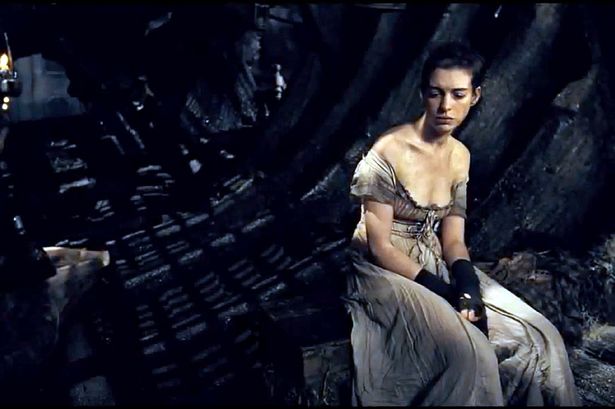 To attempt a film version of a musical such as ‘Les Miserables’ is a bold act indeed, and though the original novel has seen over 50 variations in film and television alone since the 1890’s (the Lumiere brothers were actually one of the first to adapt the work) it’s safe to say none have been as gallant as to how it’s been presented under the direction of Tom Hooper.  Having already secured himself an Oscar for best director for ‘The King’s Speech’ Hooper is certainly no amateur behind the camera, but there’s still a degree of risk taken in his approach to make this lavish spectacle of a musical much more subtle and intimate.

The story, for those unfamiliar with the stage musical this is based on, begins in 1815 on the day prisoner Jean Valjean (Hugh Jackman) is set to be liberated after spending 19 years in prison for stealing a loaf of bread.  By the law he is to be on parole for the rest of his life, but Officer Javert (Russell Crowe) bears no sympathy and labels him a danger to society and seems bent on keeping Valjean constantly in his sights.  Treated with hostility by everyone he comes across Valjean ends up stealing from the one person that shows him an ounce of kindness, a priest of all people, and when he once again believes he’ll be sent back to prison on account of stealing, destiny intervenes and the priest sends Valjean on his way with several pricey artefacts in his possession, hoping this will give him the fresh start he desires.

Years later we catch up with Valjean who has now assumed the identity of Monsieur Madeline and is running a factory that makes rosaries.  Employed in the factory is Fantine (Anne Hathaway), a sad-eyed, down on her luck woman working as hard as she can in order to feed her illegitimate daughter Cosette (played as a child by Isabelle Allen and as an adult by Amanda Seyfried).  When she is unfairly dismissed from the factory she turns to prostitution, and upon finding her when she is about to be arrested for assaulting a client, Valjean shows her the greatest act of kindness by adopting Cosette and agreeing to raise her as his own, assuring that she will never go another day without food.

And that not-so-brief description is really only the beginning as ‘Les Miserables’ brings about its tale of retribution, comradeship and romance in a sprawling manner, and all these elements are presented in the truest sense of the musical form.  There is nary a word that isn’t sung or performed in a talk-singing fashion, and I dare say that if you aren’t a musical enthusiast you’ll find this quite a discordant experience.  I consider myself a fan of musicals and even I found it a little jarring at first, but eventually I settled in to its particular groove and thankfully it appeared that the audience in attendance did too.  With this particular avenue being taken it was a smart move on Hooper’s part to cast actors that could actually sing, especially as he also adopted the effect to have the actors sing live as they shot the film.  Already honing his craft due to his work on Broadway Jackman is tremendous as Valjean, and the minor moments where he tears or chokes up during a performance help elevate his delivery to a far more emotional level.  Crowe is less successful as Javert with his tone seemingly staying stoic through each song making it hard to differentiate when he was singing a new tune.  Seyfried, already with the musical ‘Mamma Mia’ under her belt, has a sweet lilt to her delivery that makes her pleasant to the ear without being too screechy, and the supporting likes of Sacha Baron Cohen and Helena Bonham Carter (as a pair of thieves initially caring for young Cosette) are enjoyable enough to carry a tune but as they’re playing the comic relief of the piece their less-than-perfect delivery is understandable.

But in a film that runs over 2 and a half hours, and with such an extensive cast, there’s almost a sense of irony that its two supporting players with limited screen time between them that emerge as the stand-outs.  As Eponine, daughter to Cohen and Carter’s thieves and eventual fighter in the rebellion against the French army, Samantha Barks is simply illuminating.  Having played the role in West End productions of the show, her transition to the big screen is simply flawless as she effortlessly embodies the hopefulness and heartache her character experiences.  And then there’s Anne Hathaway who is every bit as majestic as you have heard.  The unbroken 6 minutes where Hooper stays fixed on her as she belts out the iconic ‘I Dreamed A Dream’ is simply heartbreaking, and in that one moment solidifies her performance as not only the best in the film, but one of the best of the year.

As mentioned earlier Hooper’s decision to make the proceedings more intimate and subtle by filming almost every moment in a medium or close-up shot is a risky manoeuvre given the cast and grand scope of the sets, but if the aforementioned performance from Hathaway is the pay-off then clearly it’s a successful venture.  As grandiose as it all is though, your enjoyment will stem from how much ‘musical’ you can handle and no amount of uniformed praise will convince some people otherwise, but it can be assertively testified that this take on ‘Les Miserables’ is probably the best adaption one could hope for outside of a theatre setting.