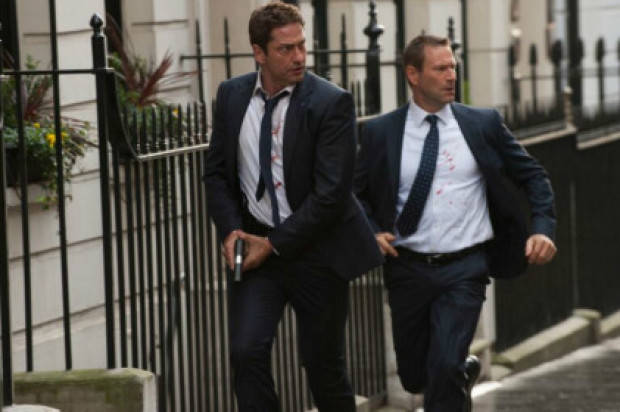 When it came down to the similarly-themed ‘White House Down’ and ‘Olympus Has Fallen’ being released within months of each other in 2013, nobody was expecting the former, bigger-budgeted, more A-list cast actioner to trail in the dust of the latter. The audience-friendly appeal of Jamie Foxx and Channing Tatum taking down terrorists within the compounds of the White House failed to ignite the same response as the more violent, dare I say misogynistic, ‘Olympus…’ which, though impressively cast in its own right, had a career-derailing Gerard Butler at the helm which hardly seemed like a viable option. Here we are though with a continuation, ‘London Has Fallen’, which joins the ranks of unnecessary sequels with this film feeling very much like a thrown-together-at-the-last-minute affair.

With original director Antoine Fuqua moving on to more sophisticated fare, the duties fall to little known Iranian-Swedish filmmaker Babak Najafi, resulting in ‘London…’ feeling far less-polished than its predecessor and coming off more like an extended, ultra-violent episode of ‘24’. That’s both a blessing and a curse though as this sequel benefits from a lighter mentality (it has far more of a sense of humour about itself) but suffers due to its CGI effects highly lacking in their believable execution; for a film with a supposed $60 million price tag, the various explosions set off throughout appear more like they’ve been made with an iPhone app than a professional team.

The story itself doesn’t exactly strive for originality with Secret Service Agent Mike Banning (Gerard Butler) accompanying US President Asher (Aaron Eckhart) to the state funeral of the British Prime Minister in London. With every major world leader attending the service, it should be the most protected event in the world yet, as to be expected, within moments of each prestigious guest arriving, various landmarks come under attack and the majority of the guest-list are brutally slain. The mastermind behind it all is feared arms dealer Aamir Barkawi (Alon Moni Aboutboul) who orchestrated the attacks as an act of revenge for the massacre on his family two years prior.

Much like the first film, ‘London…’ doesn’t hold back on its violent set-pieces with Butler’s unstoppable Banner taking out terrorists left, right and centre, barely breaking a sweat in the process. Thankfully the film eases up on the hatred of women the first film seem to have (Melissa Leo’s United States Defence Secretary had a harrowing torture scene in the original) and doesn’t overtly linger on any of the carnage; Butler is straight-to-the-point with various hand-to-hand combat scenes and bloody knife attacks. As for the man himself, he is very much at ease in this macho role, even if he’s given some terrible dialogue along the way (“Go back to F**khead-istan” being a prime example). Eckhart’s tough-guy president is likeable enough, implausible as he is, and new cast member Charlotte Riley, as a deep-cover British MI6 agent, is the only other player on board that leaves somewhat of an impression. Melissa Leo, Radha Mitchell (as Butler’s wife) and Angela Bassett (as the Director of the Secret Service) are all saddled with the bare minimum, Robert Forster (as a US Army General) is essentially a glorified extra, and Morgan Freeman (as the US Vice President) looks to have filmed the majority of his work within a weekend as his only interaction with Butler is filmed rather suspiciously that it looks as if the two were never in the same room when the scene was done.

At a quick 90-minutes ‘London Has Fallen’ doesn’t have any time to waste on unnecessary exposition, and though it’s a particularly dumb film, it serves its purpose as an imitation of the glorious shameless action films of the 80’s. The closing moments seem to indicate there’s more gas left in Mike Banning’s tank, but if this series wishes to sustain itself and not suffer the same fate of something like the ‘Taken’ series, it needs to adopt a more ambitious mentality and move Butler’s unstoppable character away from the Presidential complex.