Continuing to display his strength as a non-genre conformist, director Jeff Nichols follows up his subtle sci-fi thriller ‘Midnight Special’ with this civil rights era drama that, despite its sometimes ugly ingredients, is a love story that balances the saccharine with the striking.

Based on the true story of Richard and Mildred Loving (Joel Edgerton and Ruth Negga), this simple romantic tale presents its larger-than-life actualities with a low-key mentality, allowing the committed performances to sell the story in the interim. Set throughout the 1950’s and 1960’s in United States’ Virginia, when racial prejudice was at an all-time high, Richard and Mildred defy the law at hand when they marry each other in spite of Virginia’s law prohibiting interracial marriage.

Facing either a year each in prison or a twenty-five year ban from their own state, the couple finds themselves committing deliberate acts of defiance in a bid to draw media attention to their plight, hoping it will eventually bring their case to the supreme court. Given that this was only fifty-or-so years ago it’s quite surprising how extreme the laws were regarding interracial marriage, and though ‘Loving’ displays this bigotry freely there’s no unnecessary lynch mob sequences or KKK involvement to drive this home; Marton Csokas’s vile sheriff is really the only character on hand to display such hatred towards Richard and Mildred, honing the idea that he truly believes he’s helping Richard by denying his marriage.

Whilst Edgerton is arguably the film’s most prominent actor, and he delivers a suitably understated performance, it’s the lesser known Negga and the surprising turn from the usually comically distasteful Nick Kroll that emerge as the film’s grandest assets. The Ethiopian/Irish Negga effortlessly delivers a Southern accent and captures Mildred’s gentle but stern spirit, whilst Kroll epitomises naivety as the well-meaning lawyer handling the Lovings legal proceedings.

Though the story at hand is effective and the acting is solid all around, the film could potentially be deemed flat in that it rarely presents a “showcase” moment, instead allowing its more natural restraint to sell its story. This is not a criticism on its part though as the film remains constantly engaging thanks to Nichols’ efficiency in telling a story without overly succumbing to “Hollywood” traditionalism. 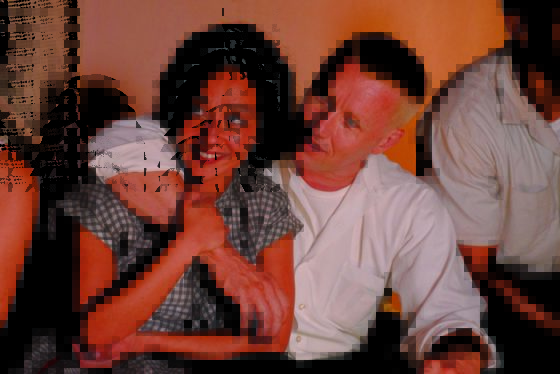 Mildred Loving (Ruth Negga) and Richard Loving (Joel Edgerton) in a scene from LOVING directed by Jeff Nichols in cinemas March 16, 2017. An Entertainment One Films release.