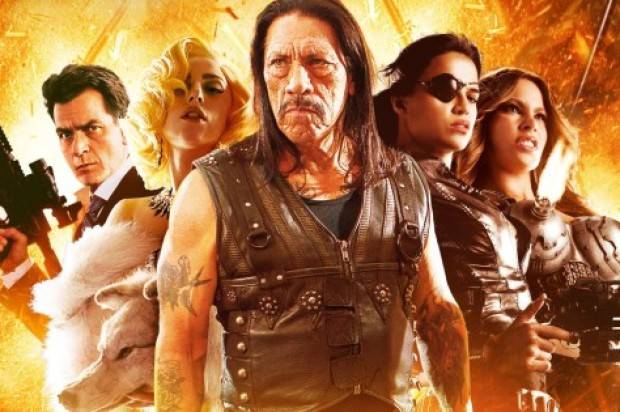 CINEMA RELEASE: MACHETE KILLS
Release date: 24th October 2013
Director: Robert Rodriguez
Cast: Danny Trejo, Michelle Rodriguez, Sofia Vergara, Demian Bichir, Mel Gibson, Amber Heard, Lady GaGa, Antonio Banderas, Cuba Gooding Jr, Carlos Estevez
Classification MA15+ (Strong Bloody Violence, Coarse Language and Sexual References)
Review by Peter Gray
In ‘Machete Kills’, the continuation of 2010’s ‘Machete’ – itself derived from a faux trailer made to precede the Robert Rodriguez/Quentin Tarantino joint ‘Grindhouse’ project – the idea that a sequel is to be bigger and wilder than its predecessor is not only realised, its explored to the point of your mind going numb. It goes without saying that ‘Machete Kills’ is a dumb film, but it’s self-consciously so and something like ‘Machete’ was never created to be anything other than entertaining. Working as director, editor, producer and cinematographer Rodriguez has his tongue firmly planted within his cheek as he compiles a 100 minute gag that plays out like an R rated ‘Austin Powers’ on steroids.
Slipping back into the well armoured leather vest Danny Trejo returns as the titular Mexican ex-federale who is recruited by U.S. President Rathcock (Charlie Sheen credited under his birth name Carlos Estevez, clearly embracing the film’s Hispanic theme) to kidnap revolutionary Mendez (Demian Bichir) who has a missile aimed at Washington DC. There’s so much more going on here but half the fun is experiencing what outlandish plot point or character will be introduced next whether it be the beauty queen pageant/secret agent Miss San Antonio (Amber Heard) indulging in a 3D sex scene with Machete (and the fact that this is a 2D presentation is part of the joke), brothel owner Madame Desdemona (Sofia Vergara) unleashing her vengeance via phallic shaped weaponry, or which identity the shape-shifting assassin known as The Chameleon will assume next; Cuba Gooding Jr, Antonio Banderas and Lady GaGa all share the one credit for the character’s disguises.
Only in Rodriguez’s crazed world would all this exist, and it seems he’s the only director who’s able to pool such random talent together to the point where it makes perfect sense. Trejo is tailor-made for the role of Machete, who is essentially the straight man in the world of nonsense that surrounds him. Rodriguez clearly has affection for Trejo, and it really shows as there’s something endearing about the soft senselessness Machete embodies. Fellow returning cast members Michelle Rodriguez and Jessica Alba have less to do this time around, especially Alba who doesn’t even get a credit here, but the likes of Heard and Vergara make up for it. Heard overplays it just enough so that her campy delivery feels organic whilst Vergara is equally hilarious and sadistic as the man-eating madam, a description taken quite literally. The less said about GaGa the better as she’s as awful as you’d expect, even in a film like this where unsubtlety is expected.
Whilst Bichir earns an honourable mention with his delightfully entertaining schizophrenic performance, it’s Mel Gibson who is perhaps the most memorable here as corrupt businessman/arms dealer Luther Voz. Gibson has never played an all-out villain before but here with his cartoonish, Bond baddie-esque antagonist he’s having more fun than we’ve seen in years. If you turned his ‘Lethal Weapon’ character evil, mixed him with the villain from ‘Moonraker’, and accompanied him with a retro sci-fi score, you’d have an idea of what Gibson is going for here. His presence alone is intriguing but with his hilariously self-aware turn he manages to elevate an already enjoyable romp to something massively entertaining.
Much like the original, this film isn’t for everyone and no doubt my credentials as a critic will be questioned due to how much I thoroughly enjoyed myself but I am fully aware of the type of movie this is, and I was in on the joke from the get-go. I suppose the best way to watch ‘Machete Kills’ is to view it as a send-up of action movies, and from that aspect it’s funnier than most features where that is their intention. All I can say now is I hope we get to see ‘Machete Kills Again…In Space’.
My rating 3.5/5 (Too much Machete isn’t a bad thing)