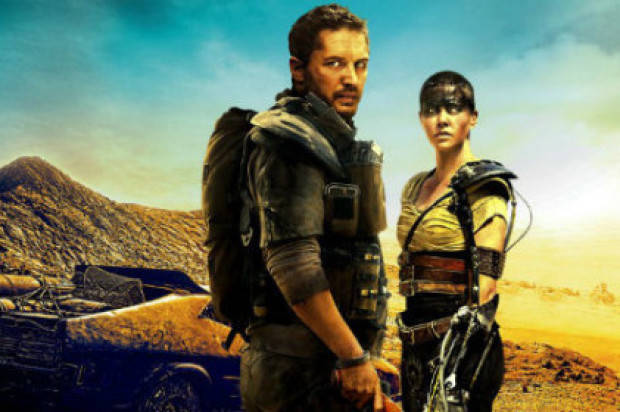 It’s rare coming out of viewing a film and not being able to immediately summon my thoughts on what I had just witnessed; for better or for worse, I can usually rack up a few interesting sounding sentences at the very least.  With ‘Mad Max: Fury Road’ it’s not that I didn’t know what I wanted to say, it’s that I physically felt I couldn’t muster up the language to say enough about what I had seen.  This is a film that has been made with so much passion, energy and vigour; it literally explodes on the screen before you.  A visceral experience 30 years in the making, this is not only the type of film that proves how effective the action genre can be, but one that cements itself as modern-day classic.

What George Miller managed to create with the original ‘Mad Max’ trilogy (the first in 1979, its sequel ‘The Road Warrior’ in 1981, and ‘Beyond Thunderdome’ in 1985) was nothing short of extraordinary, and that sense of insane danger he adopted for those films is present here, even more so I would wager, and that feeling that there is no safety net on hand with ‘Fury Road’ enhances the film even more, creating a rounded product that feels like the most complete film Miller could make.  Evidently a heftier budget (reports put production cost at $150 million) has assisted the writer/director/producer in realising his post-apocalyptic vision, but with surprisingly minimal computer-generated effects and the slightest of dialogue, it’s an immersive feature, one that Miller has thrown his whole body and soul into, with the result being a head-on collision of surreal imagery and unyielding action.

As the Namibian desert (doubling as the Australian outback) intoxicates the viewer with its unforgiving, stark beauty, we are thrust into a bleak future where lone warrior Max Rockatansky (Tom Hardy) is taken prisoner by Immortan Joe (Hugh Keays-Byrne), a ruthless dictator whose treatments of his underlings is as grotesque as his physicality; the actor, who portrayed the villainous Toecutter in the original ‘Mad Max’, is suitably terrifying with his oversized clenched teeth, breathing tubes and transparent armour aiding his beast-like appearance.  When one of Joe’s top lieutenants, Imperator Furiosa (Charlize Theron), performs an act of treason by absconding with the five beautiful young women Joe has imprisoned as his prize breeders, Max is inadvertently involved, chained to the front of a vehicle (one of many) in hot pursuit of Furiosa with an iron mask clamped to his face and a vein-to-vein link to the ethereal war boy Nux (Nicholas Hoult); the war boys, complete with white painted bodies, scalloped lips and various body art, are essentially Joe’s own suicide squad – eager to please and willing to die for a leader they believe will set them free.

To call ‘Fury Road’ a chase movie would be far too simplistic, and though that’s fundamentally what it is, as it progresses we see each character unravel, bringing to light just how strong a film Miller has sculpted with Hardy and Theron firmly in the driving seat.  As great as it would’ve been to see Mel Gibson back in the Max role, Hardy proves to be the perfect choice, embodying the character in every sense; a vicious, almost feral, loner more likely to growl than speak who carries a mesmeric mix of nobility and brute strength.  He’s the kind of hero you want to root for.  In her role as Furiosa, Theron is equal to Hardy, coming off as just as much of a hero as Max, perhaps even more so given that Miller has constructed an arc for the character that grounds her in a sense of heartbreaking sadness.  With a shaved head, mechanical arm, and greased appearance, Theron looks every inch the warrior, and as much as this is a ‘Mad Max’ film, Furiosa is arguably the character that walks away with the entire film.

As much as Hardy and Theron dominate the film, there is no shortage of lasting impressions to be made with the supporting cast, Hoult in particular as Nux, who graduates over time from demented follower to a compassionate leader.  Former professional wrestler Nathan Jones, with his towering stature and barely there attire, makes his presence felt as Joe’s top henchman, and son, Rictus Erectus (great name!), and the model-like harem of Rosie Huntington-Whitely, Zoe Kravitz, Riley Keough, Abbey Lee and Courtney Eaton as Joe’s “wives” prove more than just damsels in distress, demonstrating their strength and reaffirming Miller’s penchant for creating strong female figures; wonderfully offset by Max’s first meeting with them when he spots them adorn in white fabric, standing in stilted poses as they quench their thirst from a rogue hose. It’s a potentially sexist image that only Miller seems to skew into female empowerment.

On a technical level the film is a marvel, the photography and oft-kinetic editing are Oscar-calibre, and the score from Dutch producer Junkie XL is an unrelenting piece that feels almost endless; the film cleverly incorporating the music within the action as an unhinged war boy swings from a bungee cord off the back of Joe’s steroid-injected Cadillac, his double-necked electric guitar wailing with literal fire as he musically narrates the non-stop battle royale that is ‘Fury Road’.

As amazing as the film is though, it’s clear that Miller has made this movie with a specific audience in mind, the die-hard fans of ‘Mad Max’ who have waited patiently for three decades to see their beloved road warrior take to the screen once more. He hasn’t disappointed his faithful followers, but outside audiences unfamiliar with the outlandish insanity the ‘Mad Max’ universe made its own may be jarred by such a full-on experience. Regardless of how you look at it Miller has masterpiece cinema on his hands here, the kind of theatrical experience suited for the big screen. Go see it! (…and then go see it again).