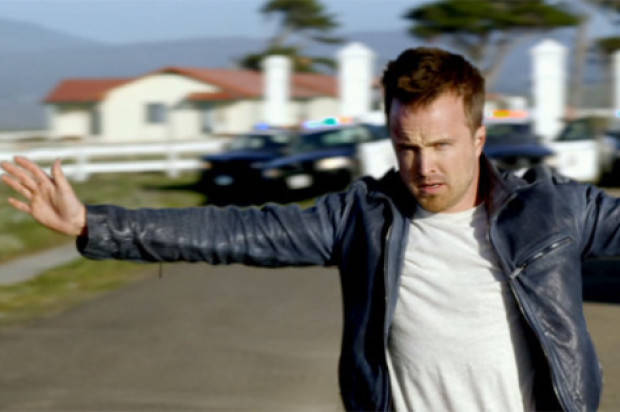 CINEMA RELEASE: NEED FOR SPEED
Release date: 13th March 2014
Director: Scott Waugh
Cast: Aaron Paul, Dominic Cooper, Michael Keaton, Imogen Poots, Dakota Johnson
Classification: M (Mature Themes)
Review by Peter Gray
Everything you need to make up your mind about ‘Need For Speed’ is best summed up with “it’s an adaptation of the best-selling EA videogame from the director of ‘Act of Valour’”. Obviously a film such as this isn’t striving to be anything profound, it’s essentially a ‘Fast and Furious’ substitute minus the charm, but even still there’s a distinct lack of effort from all involved. Director Scott Waugh fails to stamp any personality with his confounding style, screenwriters John and George Gatin concoct a story with the emotional depth of a tween (how John Gatins went from ‘Flight’ to this I’ll never know), and lead Aaron Paul unfortunately slums it in a role he no doubt was hoping would launchpad him to movie star-dom.
To be fair to Paul, he isn’t working with great material and he’s an actor capable of much more (‘Breaking Bad’ and the little seen addiction dramedy ‘Smashed’ are proof of this) so the blame shouldn’t sit with him as his deep husky voice and charisma allow his character to be easily digestible, poorly written as he is. The character in question is Tobey, an upstanding citizen of sorts who’s living in the shadow of his late father trying desperately to keep his auto shop alive and running. Dino (Dominic Cooper), a professional racer with ties to Tobey and his friends whose villainy drips off him as he smugly prances in black leather, looks to be the key to keeping said shop alive as he offers Tobey an opportunity to restore a classic car with the intention of offloading a portion of the profit. We know this will only end in a drag race of sorts as it’s drilled into us how good a driver Tobey is, and when the two take a break from staring menacingly at one another, they compete in a deliriously fast (and furious) street race that ends in tragedy for one of Tobey’s crew. Dino flees the scene, Tobey takes the blame and it’s off to jail. Are you intrigued?
Following a two-year stint behind bars (though the way everyone reacts it’s only as if 2 days have passed) Tobey’s naturally looking for revenge and it just so happens his release from prison is timed beautifully with a super-secret race that’s held annually by the particularly hyperactive car enthusiast Monarch (Michael Keaton in a particularly hyperactive performance). Completely disregarding the fact that he’s on parole, Tobey skips town with a fast car and a preppy blonde in tow. Preppy blonde or Julia as she’s known here, played admittedly rather adorably by Imogen Poots, has a brief history with Tobey (and I do mean brief) but keeping with the theme that his two-years in jail wasn’t anything substantial, she’s keen to go along for the ride. Cue roadtrip romance.
The amusing thing about ‘Need For Speed’ is that for a film that puts an emphasis on rapidity, it seems to take an awfully long time to get anywhere. Most of the film is actually set around Tobey and Julia, as well as his trio of friends who are all amazingly resourceful when it comes to travel and technology, trying to get to the race. They have two days to get from New York to California in order to qualify for Monarch’s race, and given that we all know that race will be the climax (and a rather anti-climactic one at that) most of the film comes off as filler as we see the group narrowly avoid cops as well as a series of evil drivers who attempt to take them off the road at the request of an anxious Dino. This little subplot serves nothing other than to give the film an excuse to show off how extravagant it can be with its choreography and set pieces.
Whilst I am indeed not speaking highly of the film, I have to admit it wasn’t as excruciating to watch as I was expecting, perhaps because I can see the unintentional fun peppered throughout, or maybe because Poots managed to charm me against my best judgement. One thing to be said for ‘Need For Speed’ though is that it’s the most irresponsible film to be seen in quite some time. It’s not surprising these people drive like maniacs, but wherever they go there’s a path of destruction with civilian vehicles being smashed and totalled wherever they go. If there was some sort of purpose I could perhaps overlook the destruction but the intent here seems to be to make these guys look as cool and remorseless as possible, and as such the film comes off almost sadistic.
‘Need For Speed’ already has its audience built in thanks to its videogame beginnings, so it’s not surprising I’m not in the demographic (I no doubt would’ve been had this film been released a decade ago). At two hours long the film overstays its welcome, and without much intentional humour in sight, it feels like a slow burning trip as opposed to the rush it was going for.
My rating 2/5 (Stick to ‘Fast and Furious’)