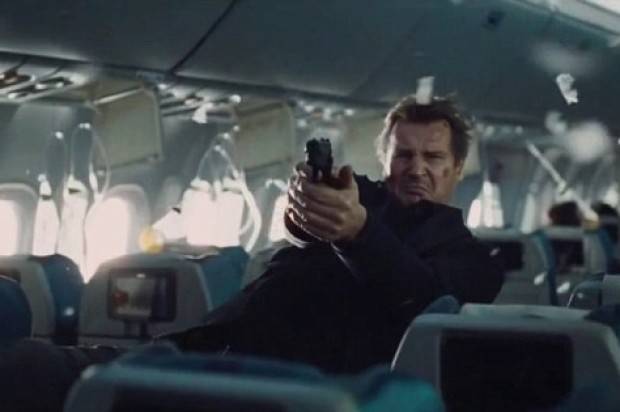 CINEMA RELEASE: NON-STOP
Release date: 27th February 2014
Director: Jaume Collet-Serra
Cast: Liam Neeson, Julianne Moore, Scoot McNairy, Lupita Nyong’o, Linus Roache, Michelle Dockery
Classification: M (Violence and Infrequent Coarse Language)
Review by Peter Gray
Thanks to the surprise success of 2008’s ‘Taken’, Liam Neeson has seen a career resurgence as such as the go-to guy for enjoyable action escapes. We’ve seen him locate his kidnapped daughter (the aforementioned ‘Taken’ and its sequel), fend off wolves (‘The Grey’) and lose his memory (‘Unknown’), so where to next for his signature brand of simple concept actioners? The sky of course!
Well thwarting a plane hijacking is the more correct setting for ‘Non-Stop’ which sees Neeson join the ranks of Kurt Russell (‘Executive Decision’), Wesley Snipes (‘Passenger 57’) and Jodie Foster (‘Flightplan’) as the exact type of passenger you want with you on an international flight when something sinister goes down. The hijacking in this case is cleverly twisted around so that Neeson’s air marshal Bill Marks is believed to be the culprit by his bosses down on the ground from the information they are relayed from inside the plane. The actual situation involves Bill receiving a series of text messages from an unknown source, claiming someone on board will die every 20 minutes if $150 million is transferred into a special account.
It’s the most basic of plotlines but it nonetheless works thanks in large part to Neeson, who even at 61 years of age moves with a swift pace and never presents a questionable doubt that he won’t get the job done. Though his character is grumpy, and isn’t subtle in expressing this, there’s something instantly likeable about him, and it’s that trait that keeps you invested, not to mention the film has done a particularly stellar job of not making the actual perpetrator obvious. One of ‘Non-Stop’s strengths is indeed its support cast, all of whom at one point will have you questioning their true character. Is it Julianne Moore’s slightly flirty constant flyer who shares Neeson’s aisle? ‘Downton Abbey’s Michelle Dockery as the helpful flight attendant? The surprisingly calm-under-pressure pilot (Linus Roache)? Scoot McNairy? Lupita Nyong’o? The possibilities seem endless and when the villain is eventually revealed, you have to hand it to the film for offering a genuine surprise. The only downside is the motive is relatively weak but that’s almost to be expected, and thankfully it doesn’t deter ‘Non-Stop’ from its entertainment destination.
Director Jaume Collet-Serra has seemingly landed a profitable package deal with Neeson as they previously struck gold with ‘Unknown’, as dragged out as that was, and the duo are set for a return next year with ‘Run All Night’ which will see the star as an aging hitman forced to take on his former boss in an effort to save his family. It doesn’t sound highly original but I dare say it will hit the right mark for the director who has found his niche in the action genre following horror outings ‘House of Wax’ (2005) and ‘Orphan’ (2009).
Though ‘Non-Stop’ is highly improbable and the finale is predictably over-the-top, complete with the trailer money-shot of Neeson flying through the air guns blazing, it never wavers in regards to audience satisfaction, and if you’re willing to check your brain at the door and enjoy it for what it is, I guarantee you’ll be pleased with your in-flight entertainment.
My rating 3.5/5 (‘Non-Stop’ fun)