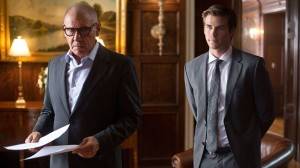 I imagine had Harrison Ford and Gary Oldman not attached themselves to ‘Paranoia’ there’d be a very good chance this would’ve gone straight-to-DVD as this wannabe-twisty, pertinent thriller is impossibly pedestrian.  A tale of greedy CEO’s being taken down by the young gun they’ve both armed with support could have made for an enjoyable, reasonably solid crowd-pleaser but sadly under the control of director Robert Luketic (‘21’, ‘Legally Blonde’), it all feels very “movie of the week”.

If you’ve caught the trailers for the film then you’ve practically seen the whole thing, but if your interest is still roused the all-too-familiar plotting focuses on young Adam Cassidy (Liam Hemsworth), a low-level inventor looking to pitch a new tech idea to his billionaire boss, Nicholas Wyatt (Oldman).  When he is fired for insubordination Adam takes his revenge by treating his co-workers to a night of excess, charging to his company credit card the tune of $16,000 dollars.  Threatened with jail, Adam is instead talked into being a corporate spy for Wyatt for another tech company run by Jock Goddard (Ford), Wyatt’s former mentor.  Thinking he’s solidified himself a bright future, not to mention a healthy pay packet, Adam takes an instant liking to his new job but a relationship with one of Goddard’s top employees (Amber Heard) helps him unravel the sinister game being played by Wyatt and Goddard.  Ooh the intrigue!

Perhaps the biggest problem with ‘Paranoia’ is its leading man – Liam Hemsworth.  Outside of his involvement in ‘The Hunger Games’ he’s really yet to prove himself as a formidable lead, and whilst he has the heartthrob status set, he doesn’t possess nearly enough charm to hold a film like this together.  His character here is meant to be some sort of smooth-talking, quick-thinking genius but he doesn’t possess nearly enough energy to make it work.  No doubt the idea to have him as shirtless as possible was a drawcard for the intended tween audience, but I suspect even they won’t find his physique a saving grace as his boyish blandness stifles any excitement that should be brought to proceedings.  Similarly the usually alluring Amber Heard comes off as nothing more than window dressing as Hemsworth’s love interest, and their deliriously tame love scenes only highlight their stale chemistry.

With no imagination or aptitude the reasonable running time seems surprisingly drawn out, and there’s a level of predictability regarding the plot that is almost insulting that it essentially comes down to Ford and Oldman being the only reasons to even consider seeing the film.  Both actors appear to be having quite a lot of fun with Oldman playing suitably to type as the corporate villain, and Ford looking quite slick with his shaved head and glasses.  There’s one scene where the two toy with each other in an icy encounter that is actually quite enjoyable to watch (and shows glimmers of the film it should’ve been) but you can’t help but feel cheated that these two icons of cinema are relegated to support players in a production clearly wheeled for young Hemsworth.

With Richard Dreyfuss, Josh Holloway, Julian McMahon and Embeth Davidtz rounding out the cast, ‘Paranoia’ certainly doesn’t skimp on talent but there’s not nearly enough entertainment or smarts to be found to justify a recommendation.  If you’re hungry for a classic Ford vs. Oldman face-off I recommend the old chestnut that is ‘Air Force One’, and if you really want a shirtless Hemsworth fix, look to his brother – he’s clearly the more talented too.