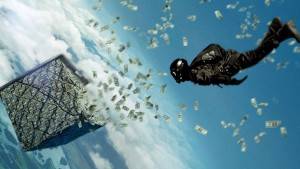 Of all the films Hollywood has to scour to plump up their remake quota, ‘Point Break’ seems like one of the least obvious choices. At 24 years old the original is certainly old enough to be updated yet given the film’s cult status, not to mention that the original ‘Fast and the Furious’ was essentially an updated version of the film subbing in car racing for surfing, it still feels all a little too soon. As curious a production it is, the 2015 incarnate is upon us and I’m sure there’s an audience of extreme sport-loving teens (potentially unfamiliar with the original) that will eat this up as director Ericson Core and writer Kurt Wimmer have opted to set this on a worldwide scale as opposed to the close-knit surfing community feel of its predecessor.

To give Core credit, the action sequences here – which include motorcycle rides, base jumping, and rock climbing – are all rather well executed with only the most minor of CGI manipulation utilised to allow the actors involved appear stunt-ready. As exciting as all that is, ‘Point Break’ isn’t helped by the fact that writer Wimmer has “created” a story that’s far too close to the original, saving any changes to be based around whatever extreme activity his characters opt to attempt. The premise here focuses on FBI agent Johnny Utah (Luke Bracey) and his mission to go undercover to catch a group of criminals – led by the enigmatic Bodhi (Edgar Ramirez) – who are believed to be behind a series of international heists. These heists however have a certain environmental awareness to them as Bodhi treks his way to spiritual enlightenment through achieving something known as the Osaki Eight, a series of death-defying ordeals that hopes to excuse the film from a deeper plot.

Whilst asking for a deeper plot in an action film may seem like too big a task, the original ‘Point Break’, and even the aforementioned ‘Fast and the Furious’, managed to deliver on both accounts. However thin a story one is working with though, all can be made better if the actors involved are up to scratch – something this film is seriously lacking. Ramirez is usually such a charismatic presence (he manages to be one of the few bright spots of the recent jumble ‘Joy’) that it seems odd in the role of a character ripe with intoxicating potential he plays it so by-the-numbers. Supporting players like Ray Winstone and Teresa Palmer don’t fare much better with Winstone lacking any of the cocky authority Gary Buesy brought to the original role, and Palmer, gorgeous as she is, unfortunately fading into the background, unable to produce any of the spunk Lori Petty delivered in the similar role of the love interest. And as for Keanu Reeves 2.0, Luke Bracey fails to make much of an impact as a big-screen hero. As wonderfully chiselled as he is – the Hemsworths would be proud – the Australian star lacks any real personality, and he fails to form much of a comradery with Ramirez or spark any chemistry with Palmer.

I was never against this remake when it was first announced; I just found it more unnecessary and having seen it now my thoughts remain the same. Though the film has the right look of a slick actioner, outside of the impressive stunt footage there’s little to get excited about. Looking at this film on its own merits, it’s an average, passable yet forgettable romp that will barely stay with you. When compared to the original? Best leave that relation alone and simply re-watch the 1991 outing.