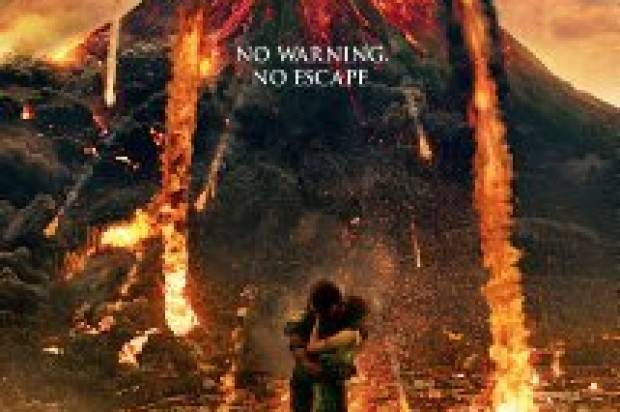 On Centre Stage.
The Night They Re-Invented Pompeii.
By Douglas Kennedy.

The subterranean gladiator movie, based on one of the world’s all-time great disasters, the destruction of Pompeii in AD79, is as predictable as a Londinium bus.
It is also as nonsensical as the complete works of Edwardian wordsmith Edward Lear, but for all that it has a hallmarks of a guilty pleasure.
Director Paul W. S. Anderson, who gave us gems such as Resident Evil, has created a 3-D digital world where good can fight evil, and beautiful youngsters fall passionately in love, as thousands of tons of ash fall on them.
If this movie had been made in the 1960s, we would have assumed that everyone involved was on drugs, but sadly this is the stable diet of the new millennium action film.
The fact is that on August 24, Mount Vesuvius erupted – and not for the first time – and between 16,000 and 20,000 were smothered in between four and six meters of ash extremely quickly.
The result is an extraordinary museum of petrified death immortalised in ‘human statues’ which are viewed by millions of tourists each year.
Anderson and his writers, Janet Scott-Batchler and Lee Batchler, have taken this moment in history, thrown in a bunch of characters who make Pinocchio look like the elastic man, and put together a narrative lifted directly from a cornflake packet.
The movie features Game of Thrones hunk Kit Harington – who prepared for the part with a gym regime worthy of superman – as gladiator Milo.
We first meet Milo as a little boy in Britain, whose tribe is massacred by resident villain Corvus (Kiefer Sutherland), before he is hauled off to Londinium (that was the original Roman settlement which became London) and into a life of slavery.
By the time Milo arrives in Pompeii – after a meeting with the princess who is destined to be the love of his short life Cassia (Australia’s Emily Browning) – he’s a pretty mean dude.
He initially rejects the hand of friendship from big man Atticus (Adewale Akinnuoye-Agbaje), whom he knows he will have to fight to the death in the gladiatorial ring, but they become best buddies.
This painting-by-numbers narrative is complete when the nasty Covus comes to town to take Cassia back to Roman and the scene is set for an explosive second half.
There’s a few other characters – including a boorish slave trader who complains about being dragged away from a perfectly good brothel to watch his ‘stock’ kill each other – but that’s about it.
The guilty pleasure I was referring to earlier was the fact that I found myself chucking so much, despite the tragic deaths of so many, albeit more than two thousand years ago.
The fighting is fast and furious, the effects impressive (although the 3-D glasses did itch at times), and the overall impression is what a load of rubbish.
But then it is unlikely to classed as such by the Hollywood bean counters as it has made $22.8 million at the US box office. Watch out for Pompeii II: The Mountain is Back and it’s Really Cross.
It’s that sort of movie world.

Rating 2/5. The 2 is the technical creatives.